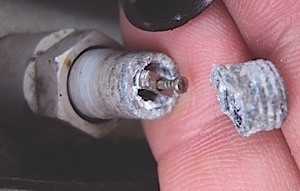 According to the Merriam-Webster dictionary, corrosion is defined as “the process where a material, especially a metal, is broken down or destroyed through chemical reactions.”

The corrosion we are all most familiar with is that which affects steel, iron’s most common alloy. While just the presence of oxygen in the air, along with some moisture, is enough for something made of steel to begin to corrode, most of the time it is accelerated by some other environmental factor, which causes the most problems.

For those working on cars in parts of the country where this type of corrosion is most prevalent, you don’t need me to tell you how bad it can be. On the other hand, if you’re working on cars in somewhere like Arizona, you probably don’t have to worry about corrosion that much – except for TPMS sensors.

For TPMS sensors, a harsh environment isn’t a requirement to see valve seizing corrosion take hold. The most common type of corrosion we typically see affecting TPMS sensors is of the galvanic variety. Galvanic corrosion doesn’t depend on your location. Sure, the same environmental factors that accelerate typical corrosion will still affect the TPMS hardware no matter what, and if you’re in Arizona that TPMS hardware will still have an advantage over somewhere like Maine, but you can’t run from galvanic corrosion – not even in Arizona.

Have you ever been around someone that you just can’t find anything in common with, someone who wears you down, someone who’s all take and no give? Well that’s sort of how galvanic corrosion works.

First, to have galvanic corrosion, you need:

2. They must be in contact with each other; and

3. There must be an electrolyte.

When dissimilar metals come into contact with each other to form a “galvanic couple,” one metal acts as an anode and the other as a cathode. Just like they say, “in every relationship there’s give and take,” in the galvanic couple the anode is the one giving and cathode is the one taking.

For TPMS sensor hardware, the aluminum valve stem serves as the anode and the brass valve core as the cathode. The electrolyte comes in the form of water (or any moisture, really). How galvanic corrosion works is the aluminum in the valve stem will dissolve into the electrolyte (moisture) and deposit onto the brass valve core. While the corrosion process is underway, the valve stem is losing its thickness and strength. Finally it will fail, usually breaking where the valve core was in the most contact with the aluminum at the treads. This condition can be further exacerbated by the introduction of an additional cathode in the form of a steel valve cap causing the damage to the valve stem on the externally treaded portion as well as the inside.

Even though that is what ends up happening a lot of the time, it wasn’t designed that way. The TPMS sensor comes from the factory with its brass valve core coated in nickel, which acts as an insulator or barrier between the two dissimilar metals. The sensor also comes equipped with a valve cap fitted with a rubber seal to keep out the moisture. So, if the valve core is properly coated with an insulator like nickel, installed correctly with the proper amount of torque and the correct valve cap is present, creating an effective seal, then there should be a very low incidence of corrosion. Upon servicing of the TPMS sensor assembly, if it’s done correctly, you shouldn’t have any problems with galvanic corrosion. The problem: it is way too easy to do it wrong.

While the replaceable snap-in rubber valve we are seeing used by several car manufacturers largely takes the worry out of servicing TPMS sensors on the vehicles they come equipped with, they only make up a small number of the TPMS sensors in service. So until all sensors start using a less corruptible system, follow these prevention basics to save yourself, or at least the next guy, some headache.

What’s the Mix Up?

Problems start arising when we mix and match valve cores and valve caps. That’s a big no-no. Like most things in life, we have to learn from our mistakes. In the beginning, you probably weren’t told about the problems that come about when you mix and match hardware, even if you know by now, there is still a lot of it still happening.

As previously stated, it’s just too easy to mess it up. We have been using brass valve stems and brass valve cores forever. It has been the de facto standard for so long you probably have brass valve cores in your shop or you will see them come into your shop at least once on any given day.

You do not want to use gold-colored brass valve cores in aluminum sensor assemblies. Only use the silver-colored nickel-plated ones.

In fact, if you have any of those gold-colored ones, go right now and throw them out. They sell valve cores in bulk, go buy a couple bags of the nickel-plated ones to keep on hand.

Follow these two simple steps and you can avoid most galvanic corrosion potential. Sure, there’s a lot more to it than that if you want to service the valve assembly the right way, the way the manufacturer recommends, but frankly if everyone working on these sensors followed these two steps, it would take care of the largest chunk of TPMS issues we see every day.

Now that you know what’s going on with those TPMS sensors that are prone to corrosion and how to keep it from happening, next time I will cover some techniques to deal with them once it’s too late for prevention.

5 Steps to a Happier Future

Here’s what you’ll need to do:

1. Replace the retaining nut and seal.

2. Replace the valve core with a new
nickel-plated one.

3. Properly torque the retaining nut and valve core to manufacturer’s specs. A valve core’s nickel coating can chip in its most vital area, exposing raw brass to the aluminum valve stem when over-torqued. If you don’t have a valve core driver that limits torque – get one. I suggest it being the only kind allowed in your shop.

4. Properly inflate the tire with dry shop air or nitrogen.

5. Install a new and proper valve cap with a seal to keep the moisture out.