Tech Feature: The Past, Present and Future of TPMS 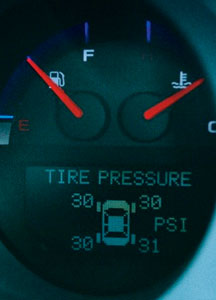 In the revised account of the holiday classic, the first spirit takes Scrooge back to the late 1990s, when TPMS is reserved mainly for European aristocratic vehicles. At the time of the pair’s visit, Audi, Mercedes-Benz and BMW are offering the tire pressure technology as an optional feature for only their top-of-the-line luxury passenger vehicles.

Coaxed by Scrooge to “lead on,” the phantom touches his arm and they move to the United States, where the Ford-Firestone tire recall is underway. The callback generates intense public reaction to tire safety issues, resulting in government intervention with the TREAD Act and the mandatory phase-in of TPMS on all new passenger vehicles by 2008. Demonstrating a sadistic sense of humor, the relentless ghost forces Scrooge to listen to regulatory discussions establishing the arbitrary 25% tire underinflation percentage that triggers a dashboard warning to drivers.

Exhausted by the experience, Scrooge begs the spirit to return him to his home, where he sinks into a deep sleep.

Awakened by a clock’s stroke of one, Scrooge is in the company of his next guide. The Ghost of Christmas Present quickly transports him to a room where Old Fezziwig has been replaced by a group of TPMS industry representatives reviewing their 2010 successes.

Steve Landis, product manager for Continental’s aftermarket business, states that there are more options today for tire dealers to service TPMS. “VDO Redi-Sensor multi-application sensors offer coverage for more than 90% of GM, Ford and Chrysler vehicles with only two SKUs in inventory,” he said. “The sensors are ready to install on vehicles right out of the box. They’re pre-programmed with vehicle protocols, allowing technicians to seamlessly transition from OE sensors to Redi-Sensor.”

Scrooge and the Ghost of Christmas Present listen as the men talk about the 10 million new TPMS-equipped vehicles sold this year, which joined an estimated 64 million already on U.S. roadways. All agree that programmable sensors minimize lost sales since tire dealers can have the right part, right away.

As the conversation continues, Scrooge is intrigued by the possibility of increased profitability, but is still indifferent toward stronger customer satisfaction. “Bah, humbug,” he exclaimed.

Dill Air Controls collaborated with Continental to ensure that Redi-Sensor worked right out of the box, according to Brian Rigney, general manager for Dill. “We created multi-application sensors that work with tools currently available in the marketplace and require no extra programming steps.”

Meanwhile, Scot Holloway, general manager for Bartec USA, pointed out that the introduction of EZ-Sensor was the result of “a strategic partnership between Bartec and Schrader.” He added that tire technicians now can repair more vehicles in a shorter time period.

In an ironic twist of the storyline, Scrooge is encouraged by the recent advances of the TPMS industry and seeks a speedy return to his house so he can greet the third anticipated spirit – the Ghost of Christmas Yet to Come.

A look into the future finds Rigney wanting industry players to cooperate with each other to standardize replacement TPMS parts and eliminate confusion. “Companies that may traditionally be competitors should be willing to sit down and work together,” he said.

Rigney said Dill will continue to expand efforts in 2011 to increase consumer awareness. “Tire dealers have been exposed to some level of TPMS training,” he said. “Of course, refresher courses are always helpful, but our focus must be on educating vehicle drivers.”

Dill is introducing a new countertop display that shows consumers which TPMS components must be replaced utilizing a service kit. The display includes an image of a corroded sensor. “We’re including the sensor so consumers can touch and feel it, since most don’t realize it’s inside each of their vehicle’s tires. The display also reminds consumers that a sensor’s battery will eventually fail, resulting in the need to replace the sensor.”

Bartec is developing comprehensive programs for technician training and consumer education, according to Holloway. He said online instruction will help technicians learn and understand TPMS services at their own pace. His company also is creating a consumer awareness program that includes online forums.

Schrader also will continue to build on its programmable sensor success, said Wise. “Our company will offer tools and communication vehicles to the aftermarket that heighten consumer awareness.”

Wise added that European legislation takes effect in 2012 and the Asia-Pacific region is considering similar rules. “TPMS will become global in the near future,” he said. “In fact, we’re projecting that 257 million sensors will be installed at the OE level annually by 2015.”

He said Schrader will expand its TPMS awareness campaign. “We’ll support our customers with tools to help their customers understand the critical value of TPMS service when it is needed.”

“Continental will continue to offer only the best and most innovative TPMS solutions for OE-validated fit, form and function,” said Landis. “Our company will continue to promote TPMS awareness by working with the Tire Industry Association, Specialty Equipment Market Association, and other trade organizations. We’ll also continue to train the trainers and support counter activity by helping to create displays featuring TPMS sensor service parts.”

So moved was Scrooge that he promised to live in the Past, Present and Future, proclaiming from his bedroom window that TPMS is here to stay! “Tire dealers will only see more and more TPMS-equipped vehicles,” he called out. “Not offering TPMS service is no longer an option!”

He dressed himself in his very best attire and headed to the street. Looking irresistibly pleasant, he smiled and said, “For every one complaint about TPMS, there are three testimonials to its virtue. If TPMS has prevented even one accident, then it is worth the hassles we’ve endured.”

Throw some more coal on the fire.