A collaborative partnership between Daimler, Ford and Renault-Nissan was announced to begin mass producing hydrogen-fueled fuel-cell electric vehicles (FCEVs) in the next four years. 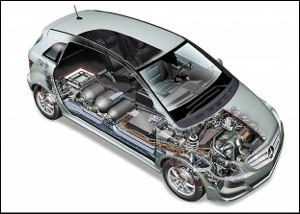 Over the past few years, the automotive industry has focused on plug-in electric vehicles and various gasoline- and diesel-electric hybrid designs; but now, electric fuel-cell vehicles are returning to the spotlight.

Recently, a collaborative partnership approach between Daimler, Ford and Renault-Nissan was announced in an effort to begin mass producing hydrogen-fueled fuel-cell electric vehicles (FCEVs) in the next four years.

The benefit of these zero-­emissions vehicles is their ­potential to reduce pollution and cut down on the world’s reliance on oil for transportation.

However, the drawback over the years has been cost. The automakers believe that combining resources could help alleviate the largest challenge for such vehicles — a fueling infrastructure.

Powered by electricity generated from hydrogen and oxygen, FCEVs emit only water while driving. FCEVs are considered complementary to today’s ­battery-electric vehicles and will help expand the range of zero-­emission transportation options available to ­consumers.

While each vehicle is expected to use the same electric core design and components, models will still be unique to each automaker. This allows manufacturers to offer different body styles, cabin designs and branding to buyers.

But the concept of sharing fuel-cell core platforms and components would also be helpful for repair shops in the future, as diagnostic tools used to service these vehicles could also be shared, instead of shops purchasing tooling for individual manufacturers.

It also would be helpful for the Society of Automotive Engineers (SAE) to become involved with the alliance as well as other OEMs to create conformity in fuel-cell components and connectors.

“Working together will significantly help speed this technology to market at a more affordable cost to our customers,” said Raj Nair, group vice president, Global Product Development, Ford Motor Company. “We will all benefit from this relationship as the resulting solution will be better than any one company working alone.”

Daimler’s research division had reported in the past that it planned to commercialize fuel-cell vehicles by 2015. However, it did not appear that this goal would have been met, and partnering in this alliance will help the automaker provide such cars just a few years later than expected.

While FCEV technology has been in the development stage for a number of automakers including General Motors and Toyota since the late 1990s, the ­implementation of a consumer vehicle hasn’t taken off due to the high costs of development, design and patents. Hydrogen fueling stations have been introduced in the U.S., but are mainly ­concentrated around FCEV ­testing areas out West.

Under the alliance agreement from Daimler, Ford and Nissan, each company will invest equally in the technology. The cars could be available as early as 2017.

According to a release from the alliance, “The collaboration sends a clear signal to suppliers, policymakers and the industry to encourage further development of hydrogen refueling stations and other infrastructure necessary to allow the vehicles to be mass-marketed.”

Check out a video on the alliance by clicking here.

Diesel Transmissions: Geared Up To Handle Power
Connect with us