Air Ride Replacement Options For Variety Of Makes And Models

By Andrew Markel
Feb 14, 2014
All air ride systems can fail and require service. There are several repair paths you can go down to offer the best option for a customer’s needs and budget. 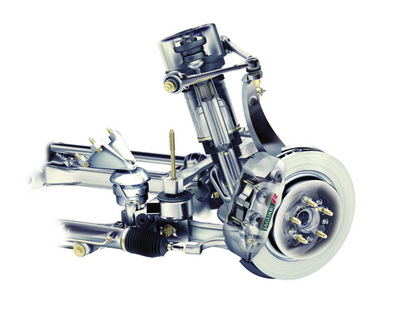 The start of any repair path is diagnostics. With modern air ride systems, failures can occur in multiple areas including the control modules, solenoids and even the vehicle network. A failure may appear to be a leaking air bag, but it might be a control module that can’t communicate, a stuck solenoid or a worn out compressor. In some cases, the control module will require reprogramming to resolve a problem.
Some of these fixes can be very affordable. Before any air ride system is scrapped for passive coil spring units, consider the resale value of the vehicle. A functioning air ride system can add thousands to the price of some vehicles. On other vehicles, the price has depreciated to the point where a functioning system makes little difference.
Always advise the customer that not repairing the air ride system removes some functionality from the vehicle like adjustable ride control and load leveling.
With more and more air-ride-equipped vehicles accumulating miles, you can expect to see a steady stream of these vehicles in your bays. You also have more options than ever before when it comes to replacement parts and conversion kits. Below is a forecast of current and future air ride vehicles and replacement options.
BMW
The 5 Series received rear air leveling suspension in 1999 as an option. The X5 was the first to get air ride in 2000. In 2002, the 7 Series received an adjustable air suspension. New models like the X6 have air ride as standard. Replacement parts and conversion kits are available.


Buick
Buick started to offer rear air leveling shocks in the early 1990s. Later models like the 1998 Park Avenue received front air ride and adjustable-valving struts. Later models like the Lucerne and Terraza also have air ride ­leveling suspensions as standard.
Cadillac
Cadillac started the trend of air ride in 1959 as an option on all models. In the 1990s, the Eldorado, Deville and Seville had air ride rear suspensions as a standard feature. Many sport models also had electronically adjustable shocks and struts called ETC. The Escalade shares the same air ride and electronically adjustable struts as the rest of its full-sized GM 1500 brothers.
In the future, the STS, SRX, CTS-V, DTS, XLR and SRX models with magnetic ride control will require replacement or passive conversion kits. 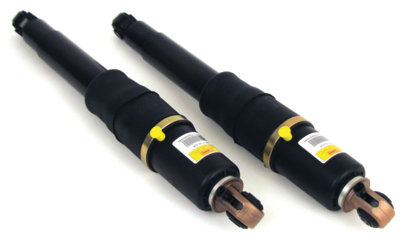 Chevrolet/GMC
The majority of the large- and medium-sized SUVs have some form of air leveling rear suspension. Some of the fully optioned 1500 SUVs have electronically adjustable rear shocks. Many replacement and conversion options are available. Some minivans and crossover SUVs have rear load leveling shocks as an option.
Ford/Lincoln
The biggest service opportunity for Ford vehicles is the 1992-2011 Crown Vic/Town Car/Marquis rear air ride shocks due to the large number of vehicles on the road. The next largest opportunity is the Expedition. Many replacement options are available to service the air ride system or convert the rear units to coil springs.
Lincoln was one of the first to offer air ride at all four corners for the Continental and Mark VII models in 1984. The Navigator has air ride shocks standard at the rear for all models. 2003-‘06 Navigators have an optional front air suspension. There are many replacement, service and coil spring conversion options for this vehicle.
Hummer
2003-‘09 Hummer H2 shares the same rear suspension with the rest of the GM 1500 variants. Air leveling suspension is standard on all H2s. Many replacement and conversion options are available.
Jaguar
The 2004-‘10 Jaguar XJ8 and XJR have air ride units at all four corners. Replacement units from the dealer can be very expensive. Coil conversion kits are available as well as replacement sensors, compressors and complete air ride units.
Land Rover
Air ride suspensions were standard on all Discovery and Range Rover models since the mid-1990s. These models have common pattern failures that can leave the suspension flat or in safe mode. There are many replacement and service options available for these vehicles from specialists. Coil conversion kits are available as a solution for a cost-conscience customer, but before considering this option, consider the resale value of the vehicle.
Lexus
From the start, Lexus offered air ride at all four corners as an option with the 1990 LS 400. Since then, air ride has become optional or standard equipment on most models including the RX and GX SUVs. There are aftermarket repair and conversion options.
Mercedes Benz
Mercedes Benz has offered several air ride and hydraulic systems since the early 1990s. These include Airmatic and ABC. Some of these systems can also have Active Dampening Control (ADC). When ordering replacement parts for these vehicles, make sure you know the system as well as information such as if the vehicle is all-wheel drive. The greatest opportunity for shops is the S-Class for replacement air ride components and coil conversion kits.
Toyota
The 2003-‘11 Toyota 4Runner with the X-REAS system is not an air ride system, but it is a system that can fail. The X-REAS system links all four shock absorbers to a center control absorber. The aftermarket does offer service parts as well as passive conversion kits.