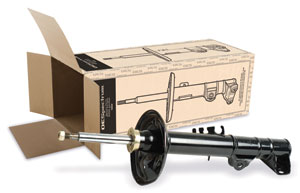 Developed through years of research and on-vehicle testing, Monroe OESpectrum units provide an unprecedented level of handling precision and control while filtering out the ride harshness commonly encountered on many foreign-nameplate applications. This unique blend of control and comfort is made possible through an exclusive internal damping control technology first developed for leading global vehicle manufacturers.

“OESpectrum shocks and struts are the answer for parts distributors and service providers that want to grow their share of the foreign-nameplate category,” said Bill Dennie, director, channel management, North American Aftermarket, Tenneco. “This sophisticated product offering helps give Tenneco and our channel partners a significant new competitive advantage in addressing the needs of today’s ride control market.”

The benefits of OESpectrum units were validated in skid-pad testing conducted by the Sports Car Club of America (SCCA). These tests showed that several foreign-nameplate models equipped with OESpectrum units had significantly better lateral stability than the same vehicles equipped with brand-new units from a leading aftermarket competitor and degraded OE shocks and struts.

“We also worked with dozens of service shops and other businesses to measure customer acceptance and satisfaction with OESpectrum products, and the results were well beyond our projections,” Dennie said. “Participating shops were able to gain new ride control sales across a full range of foreign nameplates based on the performance of OESpectrum units.”

For additional information regarding new Monroe OESpectrum shocks and struts, contact your Tenneco supplier or call (734) 384-7846.