Belt noise is typically a symptom of one of two things: belt glazing and/or slipping. If the belt has more than 50,000 miles on it, chances are it needs to be replaced. 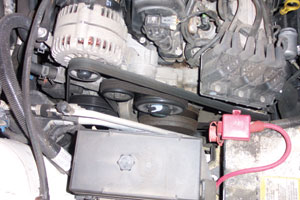 “Misalignment and slippage many times can cause noise in a drive system,” said Dayco’s Robert Christy.

Serpentine belts can be long-lived. But as the rubber ages, it tends to harden and may develop a glaze — especially if the belt is a cheap replacement made of a lower-quality rubber. A hard glazed surface doesn’t grip the pulleys as well as soft rubber, so the belt slips, chirps and becomes noisy.

If the belt shows any of the following signs, it’s time for a new belt:
•Belt frayed
•Excessive cracking (four or more cracks per inch)
•Belt has chunks of ribs or whole ribs missing
•Belt is worn to the cord
•Glazing of the belt
•Noise (squeal, squeak or chirp)
•Oil or grease contamination

It’s a good idea to also inspect the belt tensioner when changing a belt. If the tensioner is weak, binds or sticks, it won’t be able to maintain proper belt tension. Many belt tensioners in high-mileage vehicles are in poor condition and should be replaced.

Another thing to check is the alignment of the belt pulleys. All should be in the same plane. If one of the pulleys is in or out just a bit from the rest, it can force the belt to slide and twist as it rotates. This can cause noise and accelerated belt wear. It may even cause the belt to come loose.

“Always check alignment with a straight edge or laser tool and ensure that all pulleys and accessories are clean and free of debris prior to installation of new belt,” commented Christy.

Worn pulley bearings or accessory drive bearings can also cause noise, unwanted pulley wobble and accelerated belt wear. This is often a problem in older, high-mileage (more than 100K) vehicles. Any idler pulleys or other engine-driven accessories that are not running true, are worn or making noise should be replaced.

Replacement belts must be the exact same length as the original for everything to fit correctly. A belt that is too short may not fit over the pulleys, or may run with too much tension. A belt that is too long (just an inch or less) may slip, make noise and wear prematurely.

How can I tell if the belt tensioner is bad?
Watch the belt while the engine is running (be careful, don’t get too close!). If you see a lot of movement or flutter in the belt, the tensioner is probably weak or sticking and should be replaced. Many tensioners also have an indicator mark that shows its range of travel. If the mark is not between the normal limits, the tensioner is weak or sticking, or the belt is not the correct length for the application.

Some newer cars and light trucks (Ford Escape, Dodge Nitro & 2008 Ford Taurus, for example) no longer use an automatic belt-tensioner to maintain belt tension. The serpentine belt is designed to stretch slightly like a rubber band. Some of these belts require a special tool to guide the belt over and onto the pulleys when the belt is replaced. Forcing the belt over a pulley can damage it.