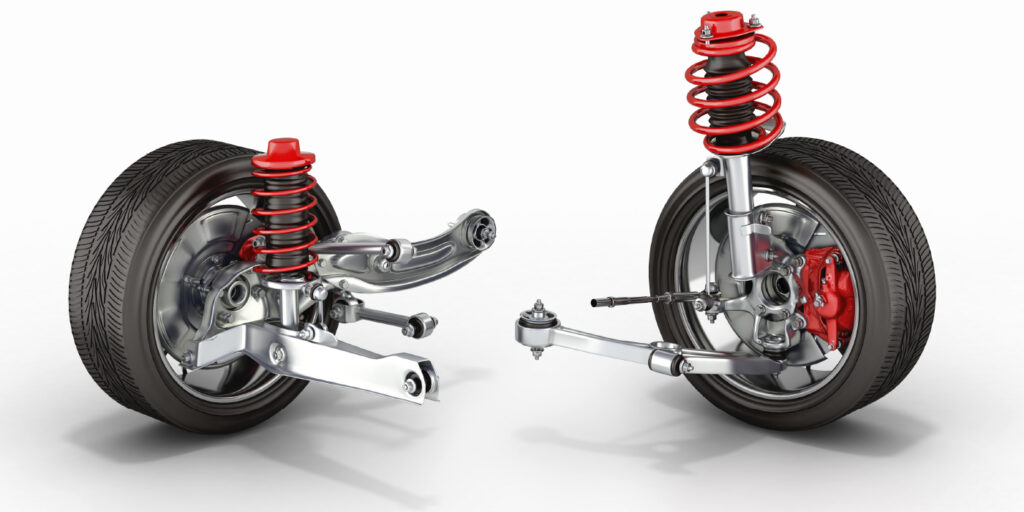 Why Simply Ordering Loaded Struts May Not Be The Total Solution

Compared to many of the components you deal with every day, shocks and struts are fairly simple devices. Their function is to dampen the movement of the springs, suspension and vehicle pitch. Yet their simplicity often belies their importance and are often taken for granted by consumers and professionals alike.

A vehicle’s suspension system handles best when it is controlled. As a vehicle brakes, accelerates and corners, weight is transferred and the vehicle’s attitude changes. As Newton said in his first law of motion, a moving object will continue moving unless it is compelled to change its state by an external force. In other words, momentum must be controlled.

If a driver is making a sudden lane change and a panic stop to the right, the weight of vehicle is transferred to the left-front wheel. If that corner of the vehicle has a weak shock or strut, the suspension could rapidly compress. As a result, the right-rear tire has less weight and less traction, as does the left-rear tire, to a lesser extent. This means that the vehicle could go from an under-steer condition to a “snap” over-steer very quickly. In the worst-case scenario, if the vehicle has a high center-of-gravity, like an SUV, it could roll.

If the vehicle has effective shocks or struts, the weight transfer is better controlled, as is the vehicle.

The role of shocks and struts has become even more important as vehicles are more commonly equipped with ABS, traction control and stability control systems. As in an emergency lane-change situation, the driver can now steer under panic braking, meaning weight transfer and vehicle pitch can be even more extreme.

The main components in a suspension system wear because they have an extremely hard life. Under normal conditions on a smooth road, shocks and struts stroke an average of 1,750 times for every mile traveled.

Struts effectively replace the upper control arm and ball joint and perform two main jobs. First, struts perform a shock-damping function like shock absorbers. A piston is attached to the end of the piston rod and works against hydraulic fluid to control spring and suspension movement. Compared to a shock, the rod of a strut can be more than three times the diameter.

And, like shock absorbers, a strut is velocity sensitive, meaning that it is valved so that the amount of resistance can increase or decrease, depending on how fast the suspension moves.

Struts also perform a second job. Unlike shock absorbers, struts provide structural support for the vehicle’s suspension. As a result, struts affect riding comfort and handling, as well as vehicle control, braking, steering, wheel alignment and wear on other suspension components, including the tires.

Because struts are part of the suspension, in some situations they wear differently than shocks. If the upper strut mount is binding, the force is transferred through the rod to the strut body. Inside, the rod is supported by the piston, and by a bushing or bearing at the top of the strut housing. Wear can be dramatic because the strut has to do the work of the bearing. Instead of the strut bearing turning and pivoting, the piston turns in the strut housing, thereby creating wear. As wear occurs over a period of time, the oil will pass between the piston and tube.

Struts are filled mostly with oil which can have different weights. When the oil heats up, it can affect the rate of flow through the valving as it either thins out or becomes more viscous. Some shock manufacturers also use multi-weight oils that work like motor oils. When the oil is cold, it may flow like 15-weight oil. But, as the oil heats up, it could flow like a 20-weight.

The oil can become contaminated with debris either from the outside or from internal components. Dirt can enter the shock through the gasket that seals around the rod. This is why it is critical to replace all dust boots when installing new shocks.

All struts and shocks should be replaced in sets of four. Replacing one or two at a time can create a balance problem that could make the vehicle unstable when braking and accelerating.

Struts and springs set the ride height of the vehicle, and they provide a comfortable, stable ride. When a wheel reacts to a bump or body motion, the spring is compressed and then releases the energy.  The spring “rate” is the amount of weight that’s needed to compress a spring one inch. You might think of it as the stiffness of the spring. A new vehicle has a specific spring rate that helps provide the ride characteristics for that particular model. The rest of the suspension components and the electronic stability control system are tuned to function properly in conjunction with that specific spring rate.

To explain why, we need to take a quick look at the role of springs in the suspension system. So, what happens if your customer installs a replacement strut assembly with springs made of poor-quality steel, or springs that don’t match the spring rate of the OE springs?  This could have an adverse impact on ride height, which affects wheel alignment, tire wear and handling.

Weak springs can affect both camber and caster, which could result in a steering pull, a change in steering effort or return, or uneven tire wear. Poor-quality, uncoated steel springs are also at increased risk of breakage and spring failure.

Here are some of the most common vehicles that require suspension service today. The range of vehicle type and typical usage shows that a large cross section of your customers may be due for service.

According to some industry experts, the Town and Country, Ram, F-150, Silverado, Traverse and Acadia offer some of the most significant opportunities with regard to loaded assembly replacements.

Industry suppliers say much of this is due to OEMs making changes to their lines; for example, Ford has gone away from compact vehicles in the U.S. and is primarily focusing on SUVs, CUVs and trucks.

When talking about loaded-strut assemblies, attention is usually focused on the convenience factor. Loaded struts are, basically, pre-assembled parts that include the coil spring, strut mount and all of the associated hardware needed to do the job. However, by themselves, they may not be entirely what the customer needs.

When recommending a loaded strut, check the quality of the coil spring. A weak spring can cause problems with the vehicle’s steering and handling, and the electronic stability control. Always be sure the spring rate of the replacement coil spring matches the spring rate of the original. You can compare the number of coils, you could look at the wire diameter and check to see if the original coil had a progressive spring-rate design.

Also, it’s important to keep in mind that just as weak springs in an inferior strut assembly can problems such as poor ride control and uneven tire wear, neglecting the spring when replacing other suspension components can lead to similar issues.