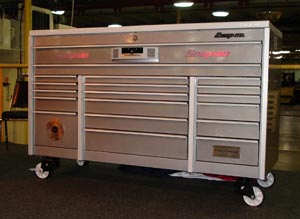 For 51 years, the Snap-on Tools plant in Algona, IA, has been producing best-in-class tool products for technicians around the globe. On Sept. 13, the plant celebrated a historic achievement as the two millionth tool storage unit rolled off the line and was unveiled to a crowd of associates, Snap-on executives and media.

“Producing the two millionth box is an impressive and exciting achievement. But today is about much more,” said Tom Ward, president of Snap-on Tools Company. “Today’s milestone is a testament to our dedicated workforce, to quality manufacturing and to providing the most valued tool and product solutions to technicians worldwide.”

Snap-on recently announced that the plant, which employs 300 people who have worked there for an average of 33 years each, will undergo a 51,000 square-foot expansion, which will include a new warehouse and a link to the company’s overall supply chain, bringing the total square footage to 470,000 square feet.

The tool box will be displayed at Snap-on’s private tool museum in Kenosha, WI, and a duplicate will be on display at the Algona plant.