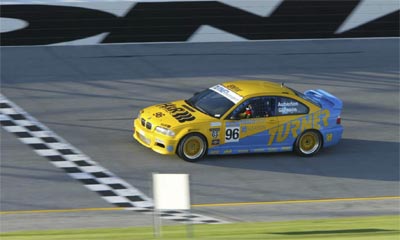 The #96 H&R Springs/StopTech Brakes BMW M3, driven by Chris Gleason and Bill Auberlen, began the 2006 Grand-Am Cup season with another dominant performance on Friday, Jan. 27. Gleason started from the back row of the 51 car GS field after mechanical troubles prevented the M3 from posting a qualifying time, but drove cleanly and moved up to 31st by lap six. When Auberlen took over during a long caution, he tore up the Grand-Am Cup GS-class competition, moving from 72nd place on lap seven to second overall at the finish of the three-hour, 57-lap race. When the checkered flag waved, the yellow and blue Turner Motorsport car had closed within half a second of the winning #44 Team Sahlen Porsche 996, which started the race on the outside of the front row.

Daytona is traditionally one of the most challenging courses for brake systems, and StopTech’s Balanced Brake Upgrade technology showed its worth. Bill Auberlen, Driver, #96 Turner Motorsport/H&R Springs/StopTech Brakes BMW M3, said, "We didn’t plan on other cars having hiccups during the race, but that’s what we capitalized on. We had our own small hiccup just before qualifying, but the Turner crew turned it around and brought us another podium for the M3. This is really a track suited for the Mustangs and Porsches and the StopTech brakes on the M3 really came through for us."