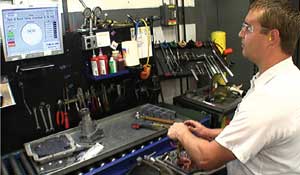 Hydraulic clutch testing is a method of simulating the operation of a transmission clutch.  The process identifies defective clutches not typically identified by dynamometer testing. “This is not a new technology at JASPER,” says David Kassebaum, JASPER Transmission Quality Engineer. “But it has been improved through the use of computerized data acquisition.”

Hydraulic clutch testing the transmission, prior to final assembly, will check for:

• Imperfections in the fluid channels; and

The test is performed using a transmission-specific plate designed to direct oil to each of the individual clutches in the transmission.

A normal transmission dynamometer does not test the individual clutches. It only tests the gear ratio, which only shows that the clutch has applied.  During the dynamometer run, the transmission pump sends significant amounts of oil to the clutch, which typically makes it difficult to identify leaks, or imperfections, in the clutch.  Hydraulically testing the clutches individually is used to reduce, and prevent, complaints of harsh or soft shifts and other driveability concerns.

“Until recently, the process of hydraulic clutch testing was done with analog gauges, and the clutch pressure measurements were not recorded or stored,” says Kassebaum.  “With hardware and software developed by JASPER, our method of testing has been greatly improved.”

As the builder is prompted through the test, the software records the pressure measurements using two pressure transducers. The software compares the measurements to the specifications within the test and determines whether the clutch passed or failed.

“If the transmission fails the test, the unit is repaired and the test is repeated,” says Kassebaum. “The software will not allow the unit to be dynamometer tested until the unit passes the hydraulic clutch test.  Once the transmission has passed this test, its measurements are saved to JASPER’s computer database.”

By utilizing this software, JASPER Quality Engineers are able to drive improvements in the remanufacturing process by analyzing this data to determine the perfect method for assembling transmission clutches.

For more information on the remanufactured transmissions of Jasper Engines & Transmissions, call 800-827-7455, or log onto www.jasperengines.com.