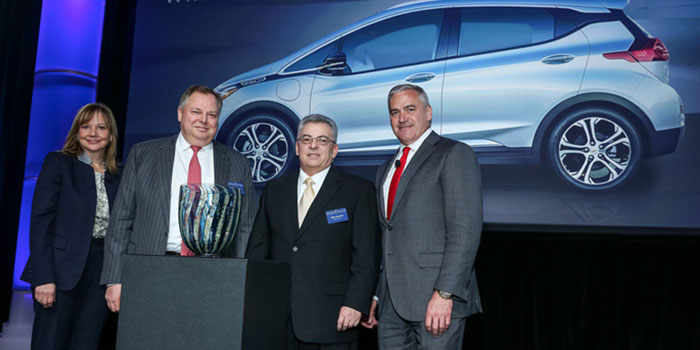 The Overdrive Award recognizes suppliers that have undertaken extraordinary initiatives that drove outstanding results for GM’s business, while demonstrating values important to GM and exceptional commitment to their community. “It was a great honor to be recognized during the GM Supplier of the Year ceremony with the coveted Overdrive Award,” said David Overbeeke, president and CEO of Brake Parts Inc. “While it takes a dedicated team to deliver the results reflected by this prestigious award, Michael Zissman, vice president OE/OES sales, has been the driving force behind BPI’s success with GM. As we look to the future, BPI will continue to work hard to ensure our business partnership with GM grows and flourishes.”

GM recognized 110 of its best suppliers from 17 countries that have consistently exceeded GM’s expectations, created outstanding value or brought new innovations to the company. The announcement represented the most suppliers GM has recognized since debuting the Supplier of the Year event in 1992. This is the first time Brake Parts Inc has received the award.

In addition to being named a 2015 Supplier of the Year, Brake Parts Inc earned GM’s prestigious Overdrive Award, an honor given to just three companies worldwide. This award recognizes suppliers who have undertaken extraordinary initiatives that drove outstanding results for GM’s business, while demonstrating values important to GM and exceptional commitment to their community.

“We are focused on building positive supplier relationships, bringing new, customer-centric innovations to GM, and being the OEM of choice among suppliers,” said Steve Kiefer, vice president, global purchasing and supply chain for GM. “The companies we recognized not only have brought innovation, they delivered it with the quality our customers deserve.”