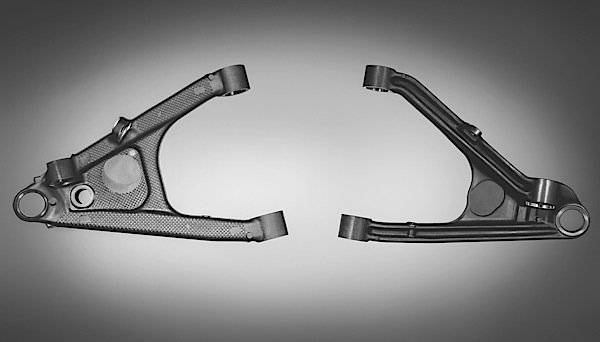 For every 10 percent reduction in vehicle weight, there is a 5 to 7 percent fuel savings. Since 1990, there has been a steady increase in the weight of vehicles due to airbags, structural components and convenience features like heated seats. This fattening in some areas forced suspension components to go on a diet. 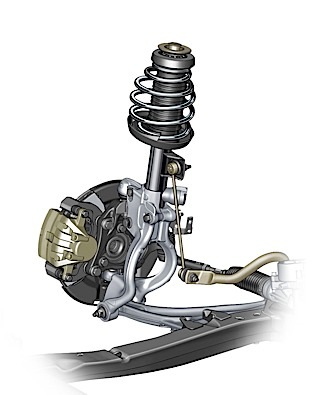 One additional benefit of aluminum suspension components is their noise and vibration dampening properties. Engineers have found that aluminum transmits less road and tire noise to the passenger compartment due to the density of the material.
The most important benefit is the reduction in unsprung weight. By reducing weight that connected to the suspension, handling increased while allowing for a more comfortable ride by using lower spring rates and dampener valving.
This is why more and more vehicles entering your shop will have more aluminum suspension components.
Inspection
In most cases, an aluminum component is as strong or stronger than steel or cast iron. But what sets aluminum apart is how it fails. Most aluminum suspension components are forged and heat-treated. If a component has undergone extreme stress like a curb strike, it will most likely crack and break instead of bend.
If you have a vehicle in your bay that has been in a crash or has had a curb strike, look for cracks. There are dye kits on the market to help you inspect for cracks. These kits are easy to use and can spot unseen cracks.
Never try to weld aluminum suspension components. Aluminum is more heat sensitive than iron or steel. The heat from welding can ruin the temper of a component and make it more brittle. 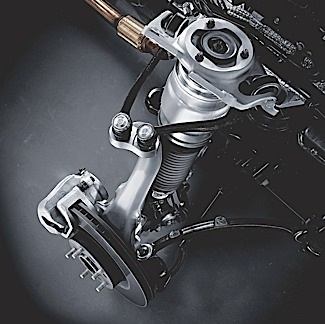 When inspecting a vehicle with aluminum control arms, pay special attention to the ball joints. Almost every stock aluminum control arm uses plastic or composite materials for the socket insert instead of a hardened metal socket. This is due to fretting corrosion where the two dissimilar metals wear and tear away at each other under loads and stress.
Once the insert is worn, the hardened stud will start to bite into the soft aluminum of the control arm. This can lead to catastrophic failure in a short period of time. The leading cause of the failure is typically failure of the protective boot. When the boot fails, water can wash out the lubricant and cause wear between the socket and stud.
Some aftermarket suspension components have been engineered to use a metal-on-metal ball and socket; they also have the ability to be lubricated after installation.
Fasteners
Aluminum components require special fasteners and tightening procedures to make sure they keep their tension and do not damage components. Typically, you will see coated threads, threadlockers and torque-to-yield (TTY) fasteners.
TTY fasteners are mounting fasteners which are torqued beyond the state of elasticity and therefore undergo plastic transformation, causing them to become permanently elongated.
Conventional ball joints and tie-rod ends use a tapered stud and hole with a nut on top to secure the stud to the knuckle. The 7-10º angled taper, along with a threaded stud and nut, lock the components together by tensioning the nut and stud. TTY ball joint and tie-rod studs have two advantages. First, they can weigh less and still apply the same clamping loads. Second, the clamping loads are more consistent and controllable.
TTY fasteners were first used for engine head bolts because they required less torque, and the torque applied was more evenly distributed. This resulted in even clamping forces on the head gasket and less distortion in the block and head.
Some of the first TTY head bolts were used on bi-metal engines with aluminum heads and cast iron blocks. The same is true for suspensions; the first vehicles to use TTY studs used aluminum knuckles like on the Corvette. Now these types of ball joints and tie-rod ends can be found on Buicks, Jeeps and Fords. Also, more bolts for shock mounts, bushings and control arms are now using TTY fasteners. They are also used in vehicles with cast-iron knuckles.
The metallurgy and heat treatment of TTY bolts and regular bolts is different, and you can sometimes tell one from the other by their appearance. TTY ball joints and studs have an inset hex head at the end of the stud. This can be used when tightening to the specified torque and setting the torque angle.
Always make sure to check the service information to get the right torque for a suspension component no matter what type of fastener. If you see an initial torque spec along with an angle in degrees, it is a TTY fastener.
Aluminum knuckles, upper control arms and ball joints can be damaged if not tightened using the correct procedure. Knuckles and upper control arms are aluminum and can be damaged if a torque wrench and torque angle gauge are not used. No matter if you go too tight or too loose, if you fail to use correct tools and procedures, you could be buying the customer a knuckle and working for free to install it.
Many ball joints may have an initial torque spec as low as 15-30 ft.-lbs. and torque angles are between 140º and 225º. Never guess or try to use your calibrated elbow; always look up the spec and use a torque wrench.
The same procedure is also required for tie-rod ends. Make sure the washers on the studs are in good condition and installed in the right direction. If a washer splits or fails, it could cause a catastrophic failure.
TTY ball joints and tie-rods are usually installed dry. Do not apply any oil, grease, assembly lube or sealer on the stud or tapered bore. The reason is lubricants reduce friction when a bolt is tightened. This actually increases the torque load on the bolt or stud, which may overload and stretch a TTY bolt too far, causing it to break.
The most important tightening procedure is to look up the torque values and procedures. Never guess or take short cuts when dealing with fasteners on aluminum components.