The attention-grabbing headline in the world of air conditioning is usually the switching of refrigerants as the industry and regulators continue to search for the next level of environmental friendliness. But the underrated A/C story that’s slowly developed during the same time period is the overall improvement of A/C systems.

The attention-grabbing headline in the world of air conditioning is usually the switching of refrigerants as the industry and regulators continue to search for the next level of environmental friendliness. In the ‘90s, the industry moved from R-12 to R-134a. Then, within the last few years, word came out about the switch from ­R-134a to R-1234yf. This latest changeover is far from widespread status, but it will start to affect the aftermarket in the next few years, and shops will need to adjust – again.
But the underrated A/C story that’s slowly developed during the same time period is the overall improvement of A/C systems. 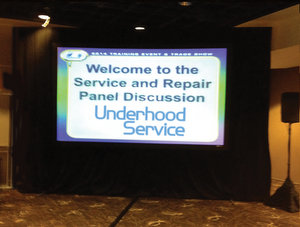 Advertisement
Click Here to Read More
Advertisement
State of the Industry
The latest Mobile Air Conditioning Society (MACS) Field Survey tracks trends in A/C maintenance and repairs, and the group unveiled preliminary results from the 2013 version at the MACS 2014 Training Event & Trade Expo in New Orleans. The 2013 field survey compiled data on more than 500 vehicles that went in for A/C service at 17 locations across the U.S.
The survey trends show the average vehicle shelf life and the quality of the average A/C system have both improved to the point where less work is needed under the extended warranty. The MACS survey in 2003 showed that nearly 60% of the fleet came from original vehicle ownership — a number that is always above 50% (sometimes as high as 70%) as far back as the 1990 MACS survey. The original vehicle ownership of the fleet in the 2013 MACS Field Survey was down to 35%. 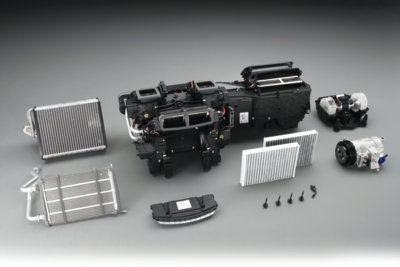 The average vehicle age in the 2013 survey plateaued in the seven to 13 year range. This range extends well past where it was in the early ‘90s and seems to have extended further with each successive survey in the past decade. Over 40 percent of the vehicles in the survey fleet were in the 150,000 to 200,000 mile range. That number was 10 percent in 2003.
As that average vehicle age evolved, so did the service required. Better quality systems lead to less leak and replacement-related servicing and more diagnostic time. Nearly 90 percent of the fleet in the 2013 survey had system pressure prior to service.
Reasons for service
The decade in between the 2003 and 2013 field survey could be illustrative of a shift in the top A/C repair services for the aftermarket.
In 2003, the top reasons for service included compressor case leaks (17%), hose leak (10%), leaking compressor shaft (9%) and leaking seals (8%).
In 2013, the top reasons for service included compressor case leak (13%), hose leak (12%), leaking condenser (11%), service ports leaking (10%), failed compressor clutch (9%) and leaking evaporator (7%). There were no leaking seals recorded in 2013’s survey. Leaking evaporators barely registered in 2003’s survey (2%), and service port leaks were noted as a potential new leak source.
Other results from the survey:
• 69% of the survey fleet required refrigerant circuit service.
• 23% of the fleet had control service
• 8.1% of the fleet had a compressor clutch failure.
• Almost 60% had a control failure located in the vehicle interior; just about 40% of control failure was located in the engine compartment.
• Average repair cost of R-134a systems in vehicles 1995 model year or later was $649. In 2003, the average R-134a repair cost was approximately $450.
MAC Systems Using R-1234yf
Cadillac XTS (2013,14)
Chevrolet Spark EV (2014)
Chrysler 300 (2014)
Dodge Challenger (2014)
Dodge Charger (2014)
Honda Fit EV (2013,14)
Jeep Cherokee (2014)
Range Rover (2014)
Range Rover Sport (2014)
Advertisement
In this article:A/C, CC: Refrigerant, Climate Control

PPP Application Deadline Extended To August 8
Connect with us