How many times have you been working on the computer when it suddenly locks up? Not one single key or command works, and the more you click, the less it responds. The only thing left to do is hold down those three magic keys, “Ctrl-Alt-Del,” or shut the whole thing off and restart the computer. Chances are you’ll have lost whatever it was you were working on.

These days, with the advent of multiple computer systems crammed under the dash and hood, it was just a matter of time before communication between the modules was going to be an issue. This communication breakdown is usually caused by some corrupted information being passed from one module to the next. How that corrupted information gets in there is still a mystery to me. I’ve run across a few common causes: changing a battery, loose battery clamps, jumpstarting another car, etc.

An example of one of these breakdowns rolled into my shop in the form of a 2013 Ford with no radio, no A/C and with the airbag light on. Not a single button on the touchscreen did anything at all; although, you could change the volume and select limited stations from the steering wheel controls. The A/C was stuck on MAX hot air with the blower on high speed. (Real nice when it’s 95 degrees in the shop already, but it is what it is.)

Doing a full scan on the car led to three codes popping up — one for the airbag, one for the radio and one for the HVAC system. I thought that I might as well start somewhere, and the airbag seemed as good a place as any. I looked up the definition of the code, “U0422: invalid serial data,” but its description left me even more puzzled. It read, “This is not a failure. This is only to report that the Restraints Control Module (RCM) received a missing or invalid message from another module.” What the code was telling me was that the airbag was fine. It was effectively tattle-telling on one of the other modules.

Both the radio and the A/C had “U” codes stored for loss of communication. Like that was a surprise. Nothing in the car was talking to anything else, but I knew the airbag had some information it was not telling! Seeing how I had never run across this problem before, my thoughts were to read every line, every link and every note on the two other “U” codes in the diagnostic and description pages. This way I could play a little hide and seek to see where this game might lead.

I read page after page of diagnostic information, which seemed to all start with, “Remove and check connections for powers and grounds.” Yet, after reading the same info time and time again like it was Groundhog Day, I finally found this paragraph in the diagnostic tree: “If none of the buttons work, disconnect the battery for five minutes, then reattach the battery connections and restart the vehicle. Within 10 seconds, touch any button on the FCIM (Front Controls Integrated Module). After releasing the button, the FCIM will go into a recalibration and initialization procedure. This may take a few minutes. If the buttons fail to work after this procedure, replace the FCIM.”

I left the battery disconnected for the recommended five minutes, then followed the rest of the directions in the diagnostic chart. The screen went blank and a computer progress bar appeared that slowly went from left to right. Then the message, “calibration complete,” displayed. Like magic, everything was working again. Even the airbag light was off!

I cleared all the codes while I sat in the comfort of the cool breeze from the air conditioner, pondering what just occurred. I thought: Who could have imagined such a complicated scenario of events occurring in a car just a few decades ago? But at the end of the day, a good result is a result that ends with a happy customer. Hey, and for doing nothing more than hitting “Ctrl-Alt-Del” automotive-style, I’ll take it.

PHOTO TECH: How a Brake Pad is Made 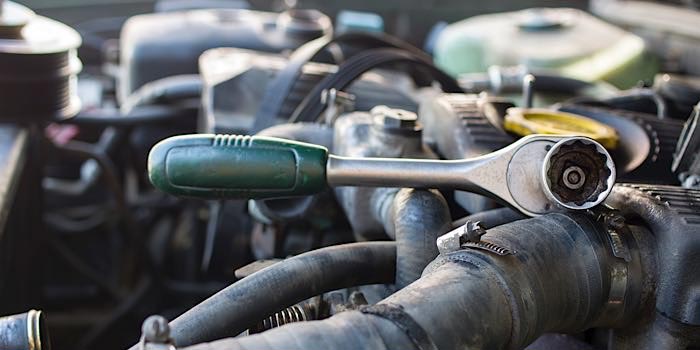