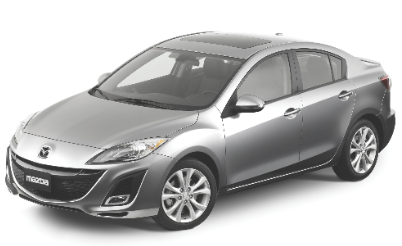 The 2004-2013 Mazda3 shares the Ford C1 platform. This is almost the same vehicle as the Ford Focus and Volvo S40 when it comes to the suspension. While the exterior and interior changed in nine years, the suspension did not. The only major alteration occurred in 2009 when the suspension was updated and lost the built-in adjustments for front caster and camber.

Front Suspension
The front suspension on the Mazda is the same design you see on many Ford products. The front knuckle is designed with unique scrub radius and steering axis. On inspection of the knuckle, pay attention to the steering arms and the included angle.

On 2004-2009 models, the camber and caster is adjustable by ±1º by moving the upper strut mount. On 2010-2013 models, there are no adjustments or conventional aftermarket alignment kits. 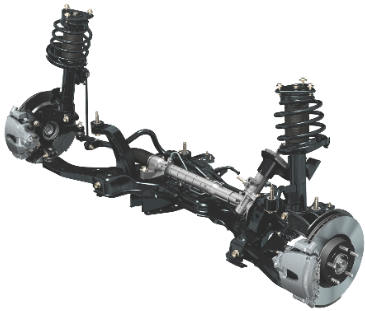 Mazda advises technicians should look for damaged parts like the lower rear control arm bushing. Some shops have had success with elongating the holes in the strut tower, but this is not recommended.

It is possible to increase adjustability by installing a “high performance upper mount, but this will significantly increase noise and vibration.

On the MazdaSpeed version, make sure the caster and camber are well within cross-tolerances. If not, the torque steer problem could get even worse.

The toe is adjustable by an eccentric bolt attached to the inner mounting point of the lower control arm.

Make sure the vehicle is loaded with a full tank of fuel or the appropriate amount of weight before setting the final angles.

Camber can be changed by installing adjustable upper control links. Before installing these parts, check the condition on the bushings in the lateral stabilizer links. If these bushings fail or go soft, they can cause negative camber and toe. The most common symptom is inner edge tire wear.

Steering Angle Sensor
On 2004 -2008 Mazda3 models, the steering position sensor does not need to be reprogrammed. However, you can observe the output of the sensor with a scan tool. By looking at the SWA_POS PID, you can see the voltage change positively when the wheel is turned to the left, and negatively when turned right. This type of steering angle is not looking for the exact angle of the wheel, but the amount and rate of steering angle change.

On 2010 and newer Mazda3 models, the steering position sensor must be relearned through the OBD II connection after the toe has been altered. 2010 and newer models use this for the electro hydraulic steering system as well as the stability control.

On 2011-2013 models, the steering angle and speed sensors also control the optional adaptive front lighting or AFS system. This system turns the headlights in the direction of the front wheels. If the steering position sensor is not calibrated, the lights will not point at the correct angle.

Mazda recommends on 2010-2013 models that after the sensor is recalibrated the technician performs the following procedure to make sure the steering position sensor is properly calibrated with the key on and the engine running:

1. Align the steering wheel to the center.

5. Verify that not codes are set after a test drive.