I don’t know where the term “master engine tuner” originated, but I suspect it parallels that of “master piano tuner” because both disciplines transform apparent discord into apparent harmony. In this day of electronically managed engines, we forget that mechanically controlled spark advance curves and carburetor mixtures don’t compensate for changes in barometric pressure and ambient temperature. Fine-tuning carburetors and distributor ignitions to compensate for often discordant barometric and ambient temperature changes is the art and profession of the master engine tuner. 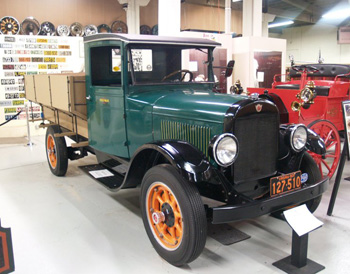 Because of the numerous variables in engine applications and latitude in interpretation, no rule of thumb should be accepted as the final word in any type of performance tuning. The “rules of thumb” stated in the following text are just that, rules that are meant only to be guidelines for the beginning engine tuner. With that said, modern precision engine tuning is usually limited to collector cars, street rods and off-road vehicles. Due to their age and the fact that most are driven a limited number of annual miles, most are required to meet only minimal exhaust emissions standards. Nevertheless, proper tuning and maintenance will keep exhaust emissions well within specified emissions levels without undue expense to fuel economy and performance.

Tuning an engine for maximum performance has three basic prerequisites. The first is that the engine must be in good mechanical condition, with the cylinder leakage being as close to zero as possible and the camshaft timing either at specification or slightly advanced from specification. Valve seat widths should not be wider than specified, and the valves should be seated as close to the combustion chamber surface as possible. Valve port pockets also should be machined to allow maximum airflow into the cylinder. Remember, too, that engines with mismatched manifolds, camshafts or cylinder heads will never be responsive to precision tuning techniques.

Second, the carburetor must be compatible with the engine. Most of the OE performance carbs built in the late ’60s and early ’70s can meet emissions standards if they are in good condition. If you’re working on a collector car, an OE “serial-number” carburetor in good condition is nearly worth its weight in gold because it will greatly enhance the performance and value of the vehicle.

If an aftermarket carburetor is used, its capacity should equal the cubic-feet of air per minute (cfm) pumping capability of the engine. Most stock engines pump air at about 80% efficiency and well-prepared racing engines pump air at about 100% efficiency. If, the mathematical pumping capability of a stock engine is 700 cfm at 6,000 rpm, the actual requirement would be 560 cfm (700 x 0.8 = 560) at or near the top of the engine’s power band. 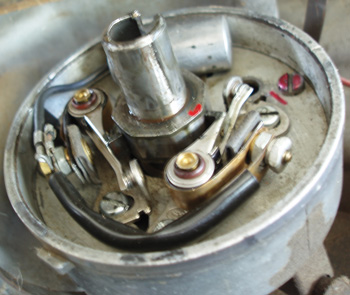 Third, understand that contact point ignitions are technology from the early 1900s. Dual-point ignitions were designed to add about 6° of dwell angle for better coil saturation at high engine speeds. At best, a well-prepared OE dual-contact point ignition with 34° of dwell can provide adequate spark up to about 7,000 rpm. At worst, a contact distributor with a worn advance plate bushing, distributor shaft or breaker point cam will allow excessive spark timing variation to occur among the engine’s cylinders. In general, a good OE high-performance contact point distributor in good condition should allow no more than 2-3 crankshaft degrees of timing variation per cylinder while most specialty distributors should allow less. See Photo 1.

The easiest way to eliminate contact point problems without permanently altering the originality of a collector car is to convert the breaker point ignition to an electronic ignition with one of several kits available from aftermarket performance sources. Most of these kits produce about 27-30° of dwell, which is adequate for average street performance use. 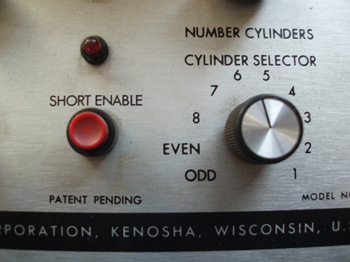 manifold into two “planes.” Each plane feeds two center cylinders on one bank and two end cylinders on the opposite bank. Most engine analyzers from the carburetor era feature a bank-to-bank “odd and even” cylinder balance test for V8 engines. See Photo 2.

To adjust idle mixture with the odd-even cylinder balance test, use the carb’s fast idle cam to set idle speed at about 1,500 rpm. Adjust the mixture on each idle mixture adjustment screw until each manifold plane exhibits an equal drop in engine speed as the odd- and even-numbered cylinders are cancelled. When finished with the odd/even balance test, squirt a little aerosol carb cleaner or propane into the carb intake. If the rpm increases, the idle mixture screws need to be backed out equally in 1/4-turn increments to richen the mixture. If the rpm decreases with the addition of carb cleaner, the screws need to be similarly turned in to lean the air/fuel mixture. 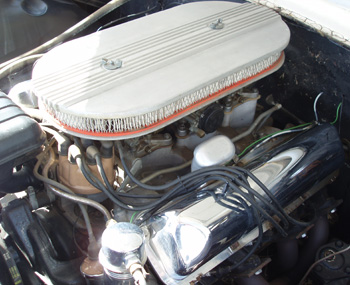 In theory, changing barometric pressures shouldn’t affect carburetor fuel mixtures because the barometric pressure at the float bowls and venturi are equal. In reality, some carburetors require more re-jetting than others to compensate for changes in barometric pressure and ambient temperature. An old rule of thumb for Holley carburetors, for example, might be a one-step jet size reduction for each 2,000’ gain in altitude and a similar one-step reduction for each 35° increase in ambient temperature. On the other hand, some carburetors do quite nicely in a number of climate scenarios with standard jetting or a one- or two-step jet change.

Spark Plug Analysis
To use spark plug coloration for jetting purposes, it’s essential to know that spark plug insulator tip operating temperatures generally range from about 700° F at idle or part-throttle operation to about 1,500° F at full load. If the spark plug insulator runs too cold the majority of the time, it will tend to accumulate fuel and oil deposits. If the tip runs too hot, it can cause a glow-plug effect that will pre-ignite the fuel and possibly melt the piston centers.

Keep in mind that, on a correctly jetted carburetor, unleaded gasoline reduces tip coloration and that accurate tip coloration occurs only after extended driving times. The metal casing of a newly installed spark plug will show coloration first. After some miles are put on the spark plug, the center insulator will begin to “color” a light grey or tan.

When selecting a spark plug heat range for a performance application, it’s important to reduce the spark plug heat range by one step for each one-point increase in compression ratio. For competition tuning, start with the coldest heat range possible because cold spark plugs “color” faster and present much less risk of causing expensive pre-ignition damage in the engine. If low-speed fouling occurs, increase the heat range in one-step increments until fouling is eliminated.

Never run higher than OE-recommended heat ranges in any performance application. Racing spark plugs, which are required in high-compression racing engines, have a very short ceramic insulator tip and a shortened ground electrode to enhance flame propagation. These spark plugs are designed, not for longevity, but rather to prevent preignition on a high-compression engine and should be used in any racing tuning application.

Spark Timing Terminology
Because the air/fuel ratio in the cylinder burns at a fixed rate as the engine speeds up, spark timing must be advanced to provide optimum power and fuel economy. Base spark advance is adjusted to produce enough vacuum in the intake manifold at idle speeds to properly operate the carburetor idle circuits and vacuum-operated accessories. In general, intake manifold vacuum on stock camshaft engines should range between 18” Hg and 22” Hg at sea level. Roughly 1” Hg of vacuum is lost per 1,000’ gain in altitude. So, at 8,000’, intake vacuum will be in the 12-14” Hg range. As the engine speeds up, the distributor must mechanically advance the spark roughly 10° per 1,000 rpm increase in crankshaft speed to allow the flame front to propagate from the spark plug throughout the combustion chamber. The rate of spark advance or “curve” depends solely upon the cylinder pressure generated by a combination of compression ratio, camshaft timing and cylinder head design. When an engine reaches approximately 4,000 crankshaft rpm, high combustion chamber turbulence generally eliminates the need for additional spark advance.

The vacuum advance on a mechanical distributor adds 10-15 crankshaft degrees to the mechanical timing curve and creates additional burn time for consuming the slow-burning, lean, fuel mixtures produced at part-throttle driving conditions. The vacuum advance merely enhances fuel economy and will not affect full-throttle performance unless the distributor advance plate is worn and won’t return to the zero advance position.

Tuning the Spark Advance
It’s very instructive to use a vacuum gauge to evaluate base timing. When the base timing is advanced too far, the idle quality will roughen as the intake vacuum reading peaks. When the base timing is retarded, the idle smoothes out as the vacuum reading drops several inches of mercury (” Hg). The reading at this point will, with the exception of a few post-emissions engines running retarded timing, be close to OE specification.

If the engine has a competition camshaft with valve timing overlap, the rough idle and poor low-speed driveability can be helped by adding to base timing and reducing mechanical spark advance. To illustrate, six crankshaft degrees can be added to base timing by reducing mechanical advance from 13 distributor degrees to 10 distributor degrees. Motorcraft distributors accomplish this by building a 10° and a 13° slot into their advance assemblies. General Motors and other distributors require advance-limiting bushings to achieve the same effect.

Because rich and lean air/fuel mixtures burn more slowly than does a stoichiometric mixture, over-advancing the spark timing will tend to improve the performance of a rich or lean engine by extending the burn time of the combustion event. On a lean engine, running an extended burn time can overheat and possibly melt the dome of the piston. On a correctly jetted engine, over-advanced spark timing will overheat the spark plug’s center and ground electrodes. The center insulator will also exhibit the characteristic salt-and-pepper appearance of small bits of melted aluminum piston being stuck to the spark plug insulator.

Over-advanced spark timing can cause the irritating “pinging” sound of detonation in a high-compression engine running on pump gasoline. Detonation occurs when the gasoline burns in an uncontrolled manner and causes an abrupt, destructive rise in cylinder pressure. Detonation is characterized by broken piston rings, ring lands and chipped spark plug insulators.

Elapsed Times and Trap Speeds
A carbureted engine can most effectively be precision-tuned at the local drag strip because the elapsed time and top speed of the vehicle can be very accurately measured. With that in mind, the conventional rule of thumb says that top speeds are influenced most by spark timing and that elapsed times are influenced most by air/fuel mixture ratios.

In any case, serious tuning mistakes can be avoided by limiting spark timing changes to 2° increments and carb jetting changes to one- or two-step increments. Keep in mind also that spark advance requirements generally should be reduced as air/fuel mixtures approach their optimum value. When an incremental adjustment of either fuel or spark yields no performance gain, optimum values have been achieved. While there is obviously latitude for discussion in these rules, they remain valid guidelines for any amateur precision tuner to follow in his quest for maximum performance from his carbureted street rod or collectible car.

You Can Tune a Carburetor, but You Can’t Tuna Fish

All About Timing Chains

10 Timing Belt Tips
Connect with us