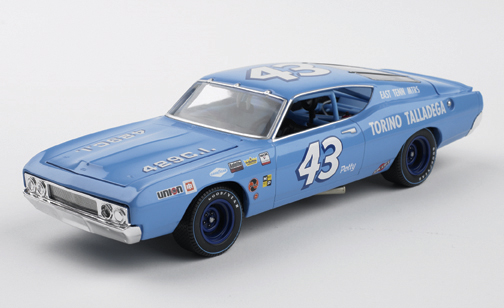 The pre-sell period for distributors runs from February to April 15, 2006, with the promotion extending from October to December 2006.

The first NASCAR-licensed die cast to be offered through the Route WIX Collectible Promotion, the 1969 Talladega Torino Ford represents not only a time when Petty used WIX filters, but also a period when he was a spokesperson for WIX. The car was designed by Holman Moody, the most successful racing operation of the 1960s and 1970s. Holman Moody’s success depended upon using the best products and equipment, like WIX Filters.

WIX Filters will donate $1 for every die cast sold to the Victory Junction Gang Camp for seriously ill children. Founded by NASCAR driver Kyle Petty and his wife, Pattie, in honor of their late son Adam, the camp is free of charge to children and their families. Located in Randleman, NC, on land donated by Richard Petty and his wife, Lynda, the Victory Junction Gang Camp is the only year-round multi-disease facility of its kind in the Carolinas and Virginia.