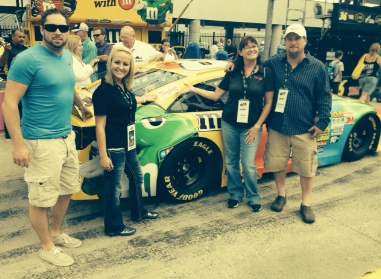 On October 12, two lucky winners and their guests joined representatives from Raybestos brand brakes at the Sprint Cup Series Race in Charlotte. The race weekend was the grand prize in this year’s Raybestos brakes “Go Green” sweepstakes and promotion.

A representative from Raybestos brand brakes, Keith Penner, recounted some weekend highlights. “We were set up with box seats … exclusive for our guests … and we enjoyed a great buffet of food and beverages. We were also able to go down to the track and tour pit road.” Penner said the group was able to get pictures, view the cars up close and see the teams prepare for the evening’s race. The group also had a brush with “The King.” Penner said, just before the race, the group took the elevator up to the tower box seats and Richard Petty joined them on the elevator. “We had a great time and developed some new friendships.”

Shari Ann Klindt of Boubin Automotive in Iowa City, Iowa, said the highlight of the trip was the race. “On Saturday night they were very close to setting a new track record for the highest overall average speed at Charlotte Raceway, but there was a caution flag near the end. The driver who held the lead and was expected to win [Kasey Kahne] got pushed back a few spots and a different driver [Brad Keselowski] won the race. It was pretty exciting during the last few laps!”

She said they also went down to pit road and saw a performance by the Goo Goo Dolls.

For Christopher Roy Clarke from the Stop’N Steer shop in Thunder Bay, Ontario, it was his first race ever. “It was unreal,” he said. “To be there live and visit pit road was an incredible experience.”

Both Clarke and Klindt said they prefer to sell Raybestos brand brakes. Clarke said his shop only uses Raybestos brakes. “They’re the best quality in the Aftermarket and they have a great warranty.” Klint said, “They’re an awesome product and my customers are always pleased with the quality.”