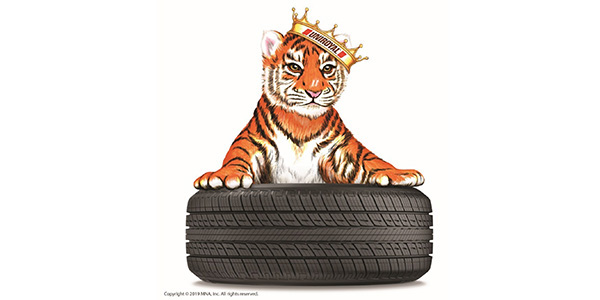 A half-century after the Uniroyal Tiger’s first appearance, the mascot has a new name and style.

Uniroyal Tires has introduced a new brand symbol that the company says has been 50 years in the making. “Royal,” a tiger cub wearing a crown and sitting inside a Uniroyal tire, will become the brand’s new icon, however, the symbol of a tiger has long been associated with Uniroyal.

In the 1960s, the brand introduced the Tiger Paw line of tires, and a cartoon tiger starred in Uniroyal ads. Tiger Paw tires were the original tires on the Pontiac GTO during that era.

Today, the Tiger Paw line of tires still represents a large segment of Uniroyal’s portfolio. The new icon was created just ahead of the largest product launch in Uniroyal’s history: the Tiger Paw Touring All-Season, which will be available to consumers in June.

The brand commissioned artist Jared Emerson to reimagine Royal the tiger. A series of images shows Royal as a tiger cub – a nod to the brand bringing value to families.

The tiger’s name, “Royal,” also is a link to the brand’s heritage. U.S. Royal was the predecessor to Uniroyal and has remained a Uniroyal trademark for decades. The new icon features a crown to emphasize the tiger’s symbolic name.

Consumers will regularly see Royal in various settings and poses as the brand launches more than 100 sizes of the Uniroyal Tiger Paw Touring A/S in 2019.

Advertisement
In this article:Uniroyal Tires