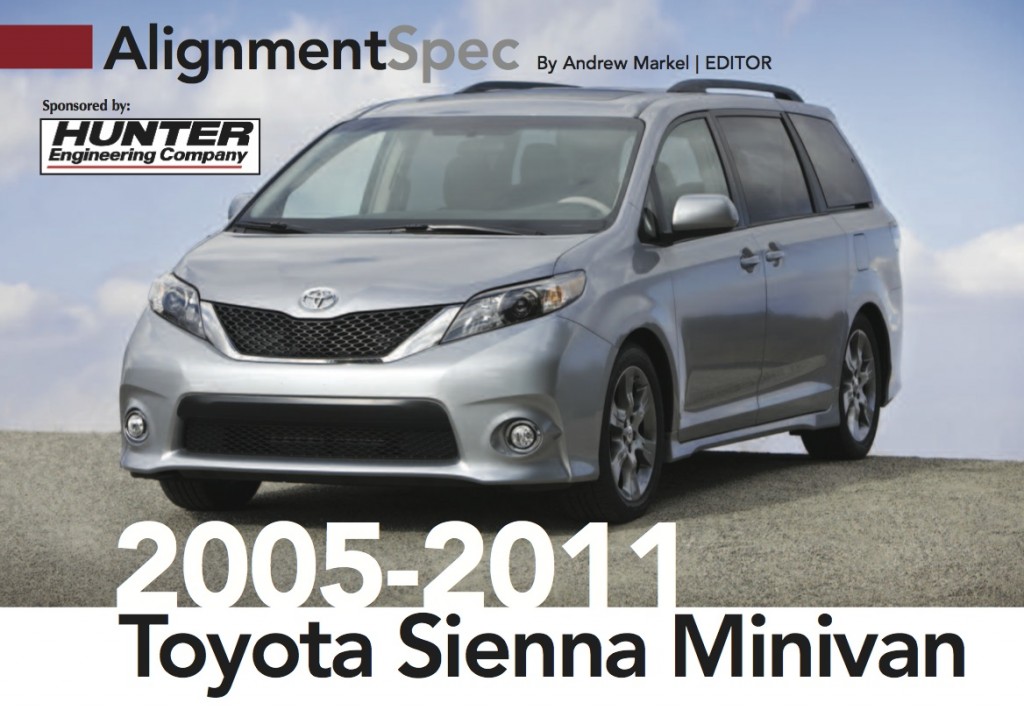 The second-generation Toyota Sienna minivan is based on the Camry platform, and comes in both 2WD and AWD versions. When aligning this vehicle, there are three things you should know. First, a Sienna with stability control will require a recalibration of the steering angle sensor. Second, rear tire wear can be a problem on some vehicles. Third, run-flat tires can be expensive and difficult to service.

The front suspension of the Sienna is a MacPherson strut design. There is no caster adjustment. Camber can be adjusted by installing cam bolts in the lower mounting hole of the strut. Some kits can give ±1.75º of camber.

Keep an eye on the caster and camber cross-tolerances because a significant difference between the two sides could cause a pulling condition.

When inspecting the front suspension of the Sienna, pay attention to the sway bar links, these can wear out at the end. Also, the bushing in the rear of the control arm can wear out. Tearing or separation  of the rubber from the carrier is grounds for replacement. 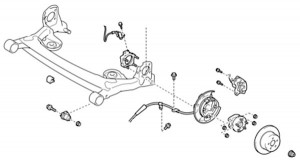 The Sienna uses a trailing arm beam axle in the rear on both the 2WD and AWD models. No adjustments are built into the axle. Aftermarket shims can be installed between the axle and bearing flange to adjust the toe and camber. These shims can adjust the camber or toe by ±1.00º.

The most common problem reported by drivers is inner edge tire wear on rear tires. The main culprit is lack of rotation. In some cases, it is a problem with the axle being out of alignment. Also, ride heights and overloading can cause edge wear. But, proper ratation can increase tire life.

Late-model vans (2004 to current) require a scan tool and special procedure to perform a zero-point calibration of the steering angle, yaw and deceleration sensors. It is highly recommended to do this through the OBDII port. You can disconnect the negative battery cable, but this can’t confirm that the system has been calibrated properly. It’s common to perform the battery disconnect procedure only to have the vehicle return with the VSC light on.

Use a scan tool, or Hunter’s CodeLink tool, which is programmed to address Toyota’s requirements relative to the VSC zero-point calibration. Hunter has simplified the process with a seamless transition from the final front toe adjustment to the required reset. You can reset the system by jumping two pins in the diagnostic connector and/or disconnecting the ­battery, but there is no way to confirm or document that the calibration was properly performed.

The VSC system relies on ­accurate steering input from the steering angle sensor to analyze a situation and apply appropriate measures to help direct the ­vehicle on the intended path.

After the recalibration, the vehicle should be drive for five minute and at least one lock-to-lock turn is performed. 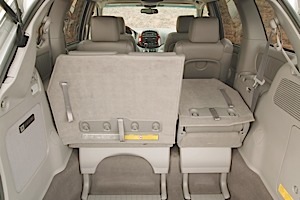 When run-flat tires were first introduced on the AWD Sienna in 2004, replacement Dunlop DSST or Bridgestone tires could cost as much as $700 each. Today, replacement tires can be found in the $200 range. Tires get more expensive as the Uniform Tire Quality Grading Standard (UTQGS) rating for wear increases.

The 2004-2006 Sienna AWD models were part of a successful class action lawsuit that alleged the tires were wearing prematurely and unevenly. Plaintiffs were given a tire warranty that gave them new tires if the existing set wore out before three years or 36,000 miles. There was no reimbursement for alignments. Many owners reported their tires wore out in as little as 15,000 miles, with most of the wear occuring at the rear according to consumer complaints.

It is possible to replace the run-flat tires with standard tires, but the customer should buy a spare tire, inflation kit with sealant or a roadside service plan.

If they go with the spare tire option, on AWD models the spare can take up room behind the third-row seat and prevent the seats from being folded flat.