With extended service intervals and poor maintenance habits, oil sludging problems can cause the camshafts to seize and break belts. And, as engines get more complicated and expensive to repair, educating your 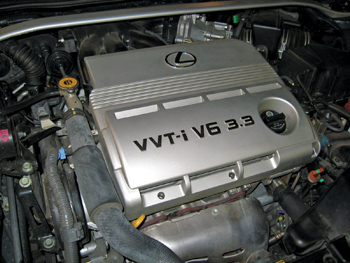 Automotive engine design has changed over the last 40 years since timing belts first came into broad use. Early timing belt designs showed the strengths and weaknesses of driving the camshaft(s) with a rubber belt, often with disastrous results. Many car manufacturers earned a reputation for building junk when their engines failed prematurely due to belt failure.

Over the years, nearly every manufacturer has built a model or a few models that became lemons before their time, just because they had a belt instead of a chain or gear drive. Of course, some manufacturers use both, even on the same engine.

With DOHC and multi-valve designs being the norm today, a lot of manufacturers have gone back to chains for their durability, reduced maintenance costs and consistency in designing more efficient and powerful engines.

Toyota and its luxury division Lexus have converted almost all of their current vehicles to chain-driven designs. Historically, Toyota has made far more chain-driven engines than belt-driven ones, and their durability index has stayed consistently high because of the use of chains.

I didn’t take the time to add up the numbers, but suffice it to say that there are many millions of Toyota and Lexus vehicles out there that still need routine timing belt changes. Because these cars have high value and popularity, and the fact that most models do not suffer serious consequences due to a failed belt, timing belt replacements can provide many years and miles of additional service.

That said, some of the later models with Variable Valve Timing with Intelligence (VVT-i) could suffer serious and expensive damage during a timing belt failure. Like all multi-valve designs, given the right set of circumstances, taking a chance on ­delaying this maintenance can be costly.

This article is based on the replacement of the timing belt in a 2005 Lexus ES 330 (see Photo 1). The engine is the 3MZ-FE — an all-aluminum 3.3L V6 with all-aluminum construction using cast-iron cylinder liners for durability and VVT-i. This engine is used in several Toyota and Lexus models; car-based models from minivans to SUVs based on the Camry platform. Earlier versions of this MZ series engine have valve reliefs that decreased the chances of piston-to-valve contact, but with VVT-i, all bets are off.

I can’t cover every aspect of this repair in this one article. You will need to do some homework and access the complete procedure either in print form or through an online source. I will highlight some things to look for during the procedure, some tips to save time and hassle, and some cautions that will keep you out of trouble.

Toyota and Lexus recommend timing belt replacement on this engine at 90,000 miles or nine years. The timing belt is pretty substantial, but it is, after all, a rubber belt and the actual service life will depend a lot on environmental and use conditions.

I usually look closely at the ­accessory belts, and make a determination from there for the recommendation of doing a timing belt inspection. Since the timing belt drives the water pump on this engine, seven years is probably a reasonable timeframe to consider this job as general maintenance. In this case, the car was right at seven years old, and just short of 90,000 miles. 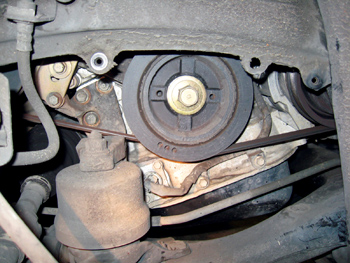 All of the models that use this engine use a transverse-mounted drivetrain. Though the engine is fairly close to the right-side inner fender area, the working space is better than some other cars. A few little details will make the removal of the engine covers and components a little easier.

1. Remove the right-front wheel and fender liner panel (see Photo 2). The small panel that provides access to the crankshaft pulley is held in place by two bolts and a push-pin that isn’t visible on all models.

2. Remove the accessory belts by loosening their adjusting bolts and brackets. By removing the ­adjusting bracket for the power steering pump and loosening the upper pivot bolt for the pump (it doesn’t need to be removed, just pulled out about a half inch), a slot in the pump bracket will allow you to drop the pump out of the way. 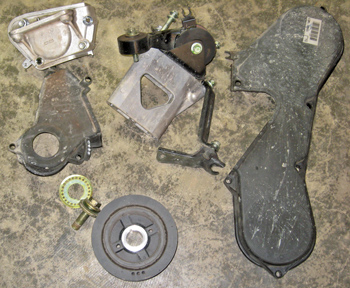 Note: This is not where the thermostat lives.

4. Loosen the crankshaft pulley bolt. We all know that you can use a pulley holding tool and a breaker bar, but an impact wrench will easily remove the bolt, in most cases.

5. Spray some penetrating oil on the end of the shaft and pulley and either wiggle the pulley off the crank, or use the proper puller to carefully remove the crankshaft pulley. I like to align the pulley timing marks with the timing tab on the front cover (see Photo 4) 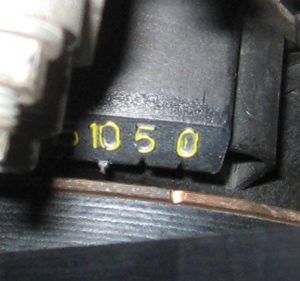 before I remove anything, just to have a good reference for the timing marks.

6. With the pulley removed, you can now remove the upper and lower front covers. By releasing the clips and pulling up on the engine harness, a little more room is available to get the upper cover out. Removing the power steering bracket, as noted earlier, allows the lower cover to come out easier as well. Also remove the outer guide washer from the crankshaft and make note of how it goes on (concave side out).

7. Check the timing marks at the crankshaft. There is a small pin on the face of crankshaft sensor wheel and bump on the oil pump housing, (see Photo 5a) and at both camshafts (mark on the face of the sprockets, small depressions on the inner front cover) See Photo 5b. If the marks are not lined up, put the crank bolt back in and turn the engine one revolution to line them up. 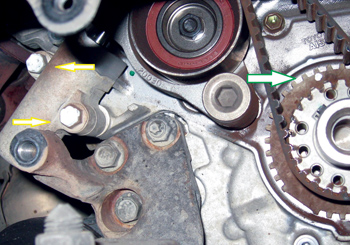 8. Remove the bracket that holds the right-side mount ­assembly. The bolts may not come out all the way, but the length of the studs should allow you to pull the bracket out with the bolts still in the bracket.

9. At this point, if everything is lined up, remove the two bolts for the tensioner (refer back to Photo 5a). Since they are mounted horizontally, they will have tension on them until one is out and the tensioner is allowed to rotate away from the belt. If you ­remove the tensioner roller, make sure you don’t lose the washer that goes between the housing and the engine block (see Photo 6). 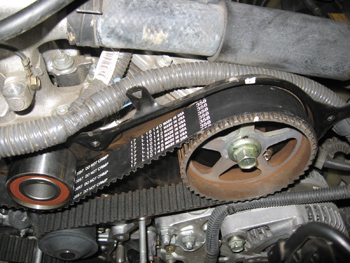 Note: Once the tensioner is removed, there is enough slack to carefully rotate the crankshaft counterclockwise about 60 degrees. This will provide enough clearance to prevent piston-to-valve contact if the camshafts should turn with the belt removed. Remove the timing belt, starting at the tensioner roller and working clockwise, and ending at the crankshaft pulley.

At this point, you have access to the water pump pulley and idler rollers and visual access to the seals for the shafts. Look for leaks, evidence of contact between the belt and the covers or the front of the engine, and roughness of rotation in the water pump or rollers. At 90,000 miles, any bearing is going to have some wear, and you will need to use your judgment as to whether it’s worth taking a chance of keeping everything there for another 90,000.

I went into this repair with the intention of replacing the timing belt, rollers and water pump, along with the coolant, thermostat and accessory belts. I ordered a timing kit (see Photo 7) from an OEM supplier to Toyota that included the timing belt, water pump and both rollers, as well as the correct water pump gasket/support plate with integral seal.

If you don’t need to replace camshaft seals (I didn’t), you can remove only the front (right-hand) cam pulley. Carefully move the rear camshaft (it’s spring-loaded!) to allow access to the cover retaining bolts. And, by removing the two studs for the engine bracket that go through the water pump, the inner cover can be pulled out and up far enough to get the water pump out, and the new one installed.

Or, you can just remove the rear cam pulley and remove the inner cover altogether. The rear pulley (left-hand) is buried on some models that use this engine.

If there are leaks at the camshaft seals, or it’s something you normally do on this job, you will need to remove the inner cover anyway. Be very careful when removing the pulley and when

removing the seal. Any scoring on the camshaft-sealing surface may cause a leak; the camshafts are castings and are somewhat soft. Use a seal installer (see Photo 8) to make sure the seal goes in straight. Again, on some of these models, the rear camshaft is hard to get at.

My first recommendation here is to get your torque wrenches out. Because this engine is all-aluminum, the chances of pulling threads due to over-tightening are increased. Follow the specifications for torque carefully; Toyota lists them in three different forms, (Nm, kgf.cm and ft.-lb.), so make sure you are reading the correct value.

Since I was replacing the water pump as a maintenance item, the cooling system was drained and I decided to replace the thermostat as well. On this engine, the thermostat is located where the water inlet pipe from the radiator connects at the rear (left side of the block). 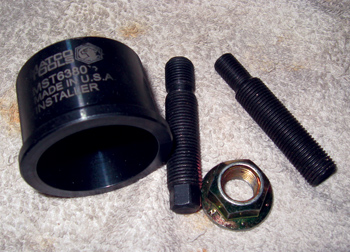 A few things need to be removed to see where it’s located. There isn’t any shortcut here. The air filter housings (upper and lower) need to be removed and a long extension and 10 mm socket used to get to the housing cover nuts (see Photo 9). Install the new “stat,” along with a new seal, aligning the “piddle” valve with the stud at the 10 o’clock position.

I used a vacuum cooling system filler (see Photo 10) to test and fill the system with new coolant before completing the timing belt installation, to make sure the water pump would seal. It would be too much work to go back in after putting it all back, only to find a leak. 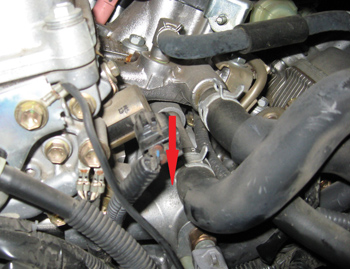 Make sure the camshaft timing marks are aligned with the inner timing cover locations (I always paint them to make them stand out better). Slowly turn the crankshaft to line up the marks on the crank sprocket and oil pump housing. Do not use any kind of tool on the crank position sensor tone ring to turn the crankshaft; even a small scratch can cause codes or timing faults.

Install the timing belt, working in reverse order, from the crankshaft sprocket, counterclockwise around the water pump and so on. You might need to slightly turn the front camshaft pulley to put just a small amount of tension on the belt to hold it in place, while you fish the belt around the other positions. You will wind up with slack on the tensioner pulley.

The rest of the job is putting the removed parts back on. The lower timing belt guide goes on the crankshaft with the concave (cup side) facing out. The crankshaft pulley bolt is torqued to 162 ft.-lbs. Don’t forget to reinstall the inner fender panel to keep water and debris off of the accessory belts. 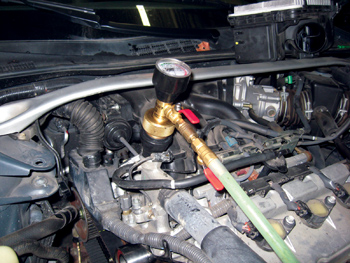 These cars and SUVs are going to be around for a long time. Getting to know the various quirks of timing belt replacement can make extra money in the ­future as the process will get easier with each procedure. Because a mistake can be very costly, reading through the service manual process before taking it apart can save time and a lot of heartache.

With extended service intervals and poor maintenance habits, oil sludging problems can cause the camshafts to seize and break belts. As engines get more complicated and expensive to repair, educating your customer on the need to do preventative maintenance becomes even more important.