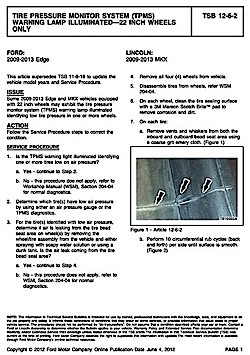 FORD
TSB Number: 12-6-2
Vehicles: 2009-2011 Ford Edge and Mercury MKX
Condition: Corrosion and on the lip of 22-inch rims and whiskers/vents on the tire’s bead seat may cause the TPMS to illuminate.
Solution: Disassemble the rim and tire and clean the rim and tire bead seats with a maroon Scotch-Brite pad.

Vehicles: All GM Vehicles with direct TPMS systems.
Subject: Adjusting tires under warranty.
This TSB is an advisory stating that adjustment of tire pressures is not a warranty procedure. It also defines a cold tire as one setting for at least three hours. It also advises against the use of non-GM tire sealants.
TSB Number: 05-03-10-020D
Vehicles: All GM vehicles with TPMS.
Subject: Nitrogen in tires.
This TSB is an update of a TSB issued in 2010 on the use of nitrogen in tires. This TSB does not endorse nor advise against the use of nitrogen in tires. But, the TSB does make some caveats. It does describe the “theoretical benefits” of nitrogen, but it also says that it is difficult to obtain nitrogen in a purified state that could deliver the  benefits in the field. If you read between the lines, this TSB says: “GM vehicles are designed to work with atmospheric air, but nitrogen can benefit the drive if the purity of the nitrogen is kept. 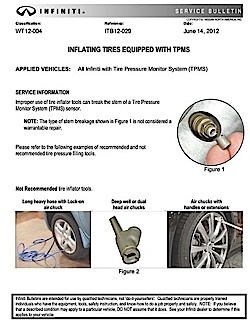 INFINITI
TSB Number: 12-29
Vehicles: All Infiniti models with TPMS.
Subject: Damage to TPMS sensors
Infiniti pulls no punches here! The luxury brand of Nissan tackles two of the leading causes of sensor damage.
Infiniti tells technicians that deep well, long reach air chucks can break and bend stems. It even advises against the use locking chucks. The TSB recommends the use of shallow chucks without extensions.
While some OEMs have stated that some sealants are compatible with sensors, Infinity states that some sealants and propellants can crack the housing of sensor. The pictures in the TSB are hard to dispute. 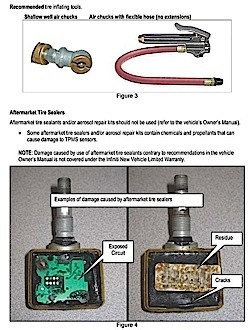 TSB Number: 12-046A
Models: 2013 JX35
Subject: TPMS registration procedure.
This TSB is of little consequence to technicians who use an aftermarket scan tool to register IDs with the TPMS module. The procedures discussed concern new hardware and software for the CONSULT III scan tool. 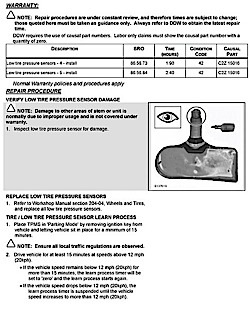 JAGUAR
TSB Number: JTB-001654
Subject: Loss of pressure during inflation.
Jaguar issued this TSB to advise technicians to be careful with valve stems during inflation or valve cap removal. The TSB advises strongly against metal valve stem caps that can cause galvanic corrosion. It also advises that if the customer has used non-approved valve caps, that all four or five sensors should be replaced.
LEXUS
TSB Number:
SB-0042-12
SB-0055-12
SB-0056-12
SB-0073-12
SB-0082-12
SB-0083-12
SB-0085-12
SB-0100-12
Subject: Sensor activation on 2013 models.
Dealer pre-delivery activation procedure to wake up the sensors. No use for in-service vehicles. 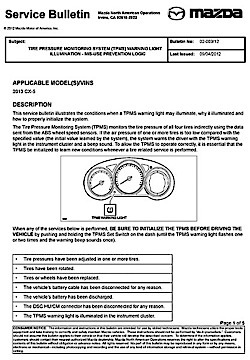 TSB Number: 02003-12MAZDA
SUBJECT: Activation of sensors.
Model: 2013 CX-5
This TSB describes how the TPMS system operates and how to service the system. Instructs technicians how to relearn sensor positions and possible symptoms for a problem.
Mitsubishi
TSB Number: 12-31-001
Models: All Models with Direct TPMS from 2004-2012
SUBJECT: TPMS General Service Procedures
This 11-page TSB outlines how to service and diagnosis Mitsubishi vehicles equipped with TPMS. This is one of the most complete TSBs ever published. This is a must read that should be printed out.
NISSAN
TSB Number: 10114B
Vehicles: All Infiniti Models With TPMS
Subject: Damage to TPMS sensors
Nissan pulls no punches here! Nissan tackles two of the leading causes of sensor damage.
The OEM tells technicians that deep well, long reach air chucks can break and bend stems. It even advises against the use locking chucks. The TSB recommends the use of shallow chucks without extensions.
While some OEMs have stated that some sealants are compatible with sensors, Nissan states that some sealants and propellants can crack the housing of sensor.
SCION
TSB Number: SB0001-12
Subject: Inflation pressure temperature compensation.
Scion released this TSB to inform technicians how ambient temperatures can influence tire pressure. The release includes a chart that plots temperature and pressure. This TSB will help you determine the correct tire pressure in all seasons. SB0001-12 is another “must print” TSB for technicians. 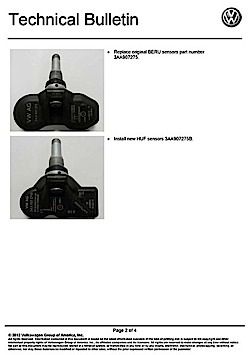 VW
TSB Number: 4412-02
Models: 2012-2013 CC
This TSB informs technicians that some CC models may experience a loss of signal from a single or multiple TPMS sensors. The only solution is to replace all four sensors with updated sensors from HUF.