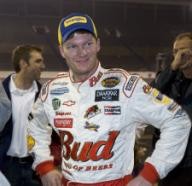 The winning bidder will ride with Dale Jr. on Oct. 26, 2005, at theWrangler brand’s "Take a Test Drive with Dale Jr." event at Lowe’s Motor Speedway. A check ceremony will be held that same day recognizing the donation with officials from the American Red Cross. The winning bidder was Don Crawford of Ocala, FL. Mr. Crawford bid on the auction as a gift for his wife Debbie, who is a Dale Jr. fan. Having felt the impact on Florida from last year’s hurricanes, Don wanted to do something to help the people along the Gulf Coast.

"We knew we had to help; we just weren’t sure which charitable organization was the best conduit for our donation," said Crawford. "When we learned of the Dale Earnhardt Foundation’s ‘Ride with Dale Jr.’ auction and that 100 percent of our contribution would pass through to the Red Cross, our decision was made. We are both huge fans of Dale Jr. as well as the entire Dale Earnhardt, Inc. organization. We are confident that our donation will reach those who need it most and as an added bonus Debbie will get a few laps around the track with her favorite driver, Dale Jr."

With a total of 65,703 visitors and 61 bids, the eBay-hosted auction opened at $888 on Friday Sept. 23 and ended Friday, Sept. 30. Bidding exceeded $10,000 after just 10 minutes. For those not bidding, the auction became a forum to congratulate Dale Jr. and thank the corporate partners for sponsoring the opportunity. Emails ranged from the personal, "I want to thank the winning bidder for being so generous. I have friends with family in an area hit by Katrina. Thank You Dale Jr., DEI, Wrangler, and everyone involved," from "Rebecca;" to the general, "thanks for restoring some faith back into professional sports and its members," from "Anonymous."

"Wrangler is extremely proud to have been able to work alongside Dale Jr. and the Dale Earnhardt Foundation in such a positive and charitable manner," said Craig Errington, director of marketing, Men’s Mass Market Brands at VF Jeanswear. "We’re very happy to have found a way to contribute to the hurricane recovery efforts and to the well-being of our fellow Americans."

The winning bidder and one guest will receive air travel, ground transportation, and accommodations in Charlotte, NC, three laps in the No. 8 Budweiser Chevrolet around Lowe’s Motor Speedway with Dale Earnhardt, Jr. (winning bidder only), passes to the Richard Petty Rookie Driving Experience, a VIP "behind-the-scenes" tour of Dale Earnhardt, Inc. (DEI) and lunch in DEI’s private dining facility, the Trophy Room, on Thursday, Oct. 27.

The Wrangler brand has had a long-standing relationship with DEI and the Earnhardt family and since 2004 Wrangler Jeans Co. has reigned as the official jeans of Dale Jr. and the No. 8 Dale Earnhardt Inc. racing team.