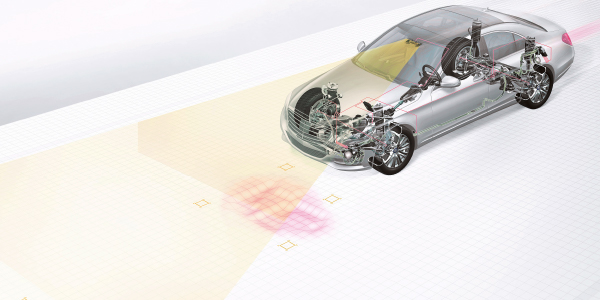 The pothole has always been the natural enemy of wheels, tires and the suspension. But with the rise of distracted drivers and autonomous driving cars, the common pothole becomes a more significant problem.

The pothole has always been the natural enemy of wheels, tires and the suspension. But with the rise of distracted drivers and autonomous driving cars, the common pothole becomes a more significant problem.

When a car hits a pothole, the wheel drops into the hole. When the wheel reaches the lip, the suspension is harshly forced upwards into the wheel well. Most people can steer around a pothole if they can see it. But, for autonomous
vehicles, seeing a pothole is not yet part of the software.

Ford has developed a system that minimizes the physics of potholes. On some Ford models with Continuously Controlled Dampening Technology, the inputs from the suspension height sensors and accelerometer are used for the stability control system.

The ride height sensor measures the initial movement of the suspension as it starts to drop into the pothole. At the same time, the stability control system analyzes the dynamics of the vehicle to determine if it is normal vehicle dynamics or a pothole. The valving in the strut then closes down and prevents the wheel from dropping further into a pothole. This all occurs in less than 2 milliseconds.

The other approach being developed for pothole management is to sense the pothole even before the vehicle reaches it. These systems will use cameras, lasers and radars together to map the road in front of the vehicle in three-dimensions.

While these systems will no doubt be expensive, they could prevent more expensive damage to the vehicle.

Wheel End: The Case Of The Shrinking Air Gap

The Future Of The Pothole