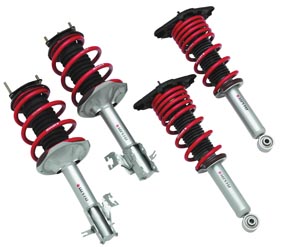 It should come as no shock that preassembled, ready-to-install struts have been a huge hit lately, not only with do-it-yourselfers, but even more so with professional technicians. The pros like them because they are much easier, faster and more profitable to install than ordinary struts. They don’t need a spring compressor to disassemble and reassemble the strut and they can get the customer back on the road much faster because of the time saved by not replacing the entire strut assembly.

Replacing a set of struts the “old-fashioned way” can add 10 to 20 minutes per strut if the struts have to be disassembled and reassembled. Pneumatic spring compressors are fairly quick, but still require some set up time (you need to use the correct adapters for the spring). Manual spring compressors are much slower and require a fair amount of muscle. There is also an element of risk when using a spring compressor because of the force exerted by the spring. The fingers of the compressor have to hold the spring securely while the technician takes the strut apart. And if a spring slips, watch out because it can do serious damage if anyone is in the way.

Another benefit of a preassembled strut is that it comes complete with a new spring, bumper and bearing plate. The upper bearing plate on front struts is extremely important because it not only supports the weight of the vehicle, but also serves as the upper steering pivot. If the bearing plate is worn or corroded (which many are after tens of thousands of miles of driving), it can make the steering feel stiff, increase steering effort, prevent the steering from returning normally after a turn, and/or create suspension noise. Squeaks or groans when turning, or clunks from the front end of the vehicle when driving on rough roads are often caused by bad upper strut plates that need to be replaced.

Unfortunately, worn strut plates are often overlooked when struts are replaced. Unless a motorist specifically complains about steering noise or a steering effort or return problem, the technician may assume the original plates are OK to reuse. So they do, and they often get comebacks because the new struts they just installed failed to solve the customer’s problem. Preassembled struts come with new bearing plates that restore steering to good as new.

The same goes for the coil springs around a strut. All springs will lose some of their ability to support weight as they age. Spring sag changes ride height, which in turn can have an adverse effect on wheel alignment, tire wear, handling and ride quality. Corrosion and fatigue can also weaken a spring and increase the risk of breakage.

Spring failures are a fairly common occurrence on certain Ford and GM vehicles, so reusing the original springs on vehicles with a known history of spring failures probably isn’t a very good idea.

Coated springs are especially vulnerable to this kind of trouble. The coating helps protect the spring from corrosion. If the original coating is nicked, chipped, flaking off, or there are areas on the spring where corrosion is nibbling away at the steel, the spring may be doomed. But even if a high-mileage spring appears to be OK on the outside, it may have microscopic fatigue cracks inside that will eventually cause it to fail. The new springs that come on a preassembled strut not only restore ride height and spring rate, they also reduce the risk of spring failure for many miles to come.

Another plus with preassembled struts is that the tech gets everything he needs in one box. There are no separate items to order (or backorder), there are no mismatched parts and there’s no waiting for individual components if an old spring, bumper or bearing plate can’t be reused.

The new strut is also assembled correctly with no missing parts and is ready to bolt in. That’s why preassembled struts have quickly become as popular as front-wheel drive halfshafts.

Preassembled struts are available for many popular applications and more are being added all the time. Coverage is best on vehicles with known spring breakage problems such as Ford Taurus and Focus, Pontiac Grand Am and others.

WHEN TO REPLACE
If the dampers can’t control the motions of the suspension, the tires will bounce excessively when the vehicle encounters dips and bumps in the road. This can make a vehicle harder to control on a rough road and increase stopping distance by reducing traction. It may also cause the tires to wear unevenly and develop a cupped wear pattern on the tread (which results in additional roughness and ride noise).

Gas-charged shocks and struts are pressurized with nitrogen gas to reduce fluid foaming when the piston churns the hydraulic fluid inside the damper. Foaming produces bubbles that reduce resistance, causing the shock to fade under hard use. This increases wheel bounce, body roll, dive and pitch, and makes the suspension feel loose and sloppy.

As the miles add up, the sliding friction between the piston rod and seal in the top of the shock or strut wears the seal. Eventually, the seal allows most of the gas charge to escape. And if the damper isn’t replaced, the seal will eventually leak fluid, too.

Shocks are pretty much a bolt-on installation on most vehicles and don’t require any special tools, but struts require a little more labor, particularly front struts on vehicles where access to the upper strut mounts is restricted (Ford Windstar minivans, for example).

A visual inspection and a bounce test will usually uncover shocks or struts that are really bad, but often not the ones that are marginal. The only way to really tell if the shocks or struts need to be replaced is to test drive the vehicle and then compare the ride and handling of the high-mileage dampers against a similar vehicle with new dampers or low-mileage dampers. A side-by-side comparison of old versus new almost always convinces a motorist that their old shocks are shot. But realistically, few people have the opportunity to partake in such a demonstration.

Several companies have developed sophisticated electronic equipment that actually measures the compression and rebound characteristics of shocks and struts. The test results can then be compared to those with new dampers to determine whether or not the shocks or struts are worn and need to be replaced.

But these machines cost thousands of dollars and are not in widespread use. Consequently, there are literally millions of vehicles on the road today with old, worn out shocks and struts that are long overdue for replacement.

A couple of years ago, one ride control manufacturer came out with the recommendation that shocks and struts should be replaced every 50,000 miles to restore like-new ride control, handling and stability. This is especially important on taller vehicles like SUVs that have a high center of gravity and are more prone to rollovers than passenger cars.

The Motorist Assurance Program (MAP) now endorses this practice in their Uniform Inspection and Communication Standards. Because of this, more and more repair shops are now encouraging their customers to have their dampers replaced every 50,000 miles.