Although belts and hoses are still classified as expendable parts, their durability has increased to the point that many import shop owners and technicians are now neglecting to perform routine belt and hose inspections. From a historical perspective, belts and hoses have moved from a recommended replacement interval to an inspection interval. This means that, unless otherwise required, there is generally no recommended replacement interval for ….

TODAY’S BELT AND HOSE MARKETS
Just recently, I had a 2001 Asian import come in for a check engine light issue that illustrates what is happening in the belt and hose markets. Because the import wasn’t a popular brand in my area, many shops had turned down the diagnostics. So, after working with a vacuum schematic, I found the cause for the diagnostic trouble code to be a clogged vacuum line.

Of even more concern was that the owner was ready to leave on a long trip with a badly cracked alternator belt. The vehicle had just been “serviced” and, in the owner’s mind, was ready for his long trip. That wasn’t the case, however, because the belt was ready to shred its way off the pulleys within a few hundred miles of high-speed driving.

Unfortunately, in their haste to sell wiper blades and fluid flushes, many quick-lube mechanics overlook expendable items like belts and hoses. Although replacing the belt wasn’t difficult for a well-tooled tech, it would have been difficult for any repair facility that didn’t have the metric wrenches needed to fit under a tight-fitting intake manifold and power steering bracket.

The A/C compressor and power steering belt also had to be removed before the alternator drive belt could be accessed. Years of corrosion made removing the A/C compressor belt more challenging than it should have been, and an even greater array of tools was required to budge the tensioning pulley from its corroded mounting. Perhaps this example explains why many quick-service facilities give hose and belt inspection a relatively low priority on their service menus. 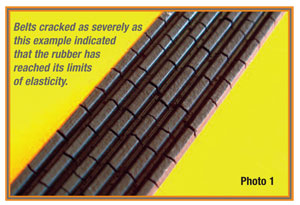 BELT INSPECTIONS
Belt inspections aren’t difficult. The first clue to a bad belt, for example, is a belt squeal heard during engine start-up. The second clue might be a belt squeal heard during parking maneuvers or during an alternator load test. The last clue is the fraying and cracking associated with a worn-out belt (See Photo 1). A frayed belt might indicate a pulley alignment problem, so it’s important to include some diagnostic time for inspecting and possibly correcting pulley alignment. 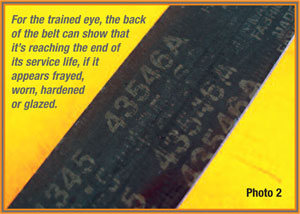 Many import manufacturers promote standards that might include the number of cracks per inch present on the inside of the belt. In addition to whatever standard might be published, I inspect the outside of the belt for signs of glazing or pulley slippage. If the original part numbers and markings are still visible, all is well with the belt and pulleys. On the other hand, if the belt is glazed or frayed, an idler or drive pulley bearing might be seizing up (See Photo 2).

In most cases, any belt running past 100,000 miles might be running on borrowed time. Of course, many belts do last longer because of the variables that affect belt life, including the amount of torque transmitted by the belt, underhood heat, and exposure to oil and atmospheric ozone.

If, for example, the engine has separate accessory belts, the alternator belt will tend to crack and harden first because the alternator is continuously laboring to operate accessories and keep the battery charged. The air conditioning compressor drive belt might be the next to fail in warm climates. Here again, if the compressor is overcharged or is seizing up, belt life will suffer accordingly. Hydraulic power steering pump belts usually last the longest simply because they transmit maximum torque only under demand. Last, separate water pump belts transmit very little torque and are the most likely to incur the least wear.

HOSE INSPECTIONS
Many years ago, the average water-cooled import had only four or five hoses including the upper and lower radiator, heater inlet and return, and a water pump bypass hose. In most cases, the lower radiator hose had a wire reinforcement to keep the hold from collapsing at high engine speeds. Imports built during the past several decades may have a dozen or more small coolant hoses that perform diverse duties, like heating the throttle plate assembly or warming up thermostatic idle speed controls.

In general, the upper radiator hose on a conventional cooling system is the first to fail because it endures the hottest coolant temperatures. The lower radiator hose, on the other hand, may operate at lower temperatures and, thus, may last much longer. The same can be said of the auxiliary hoses, including the heater outlet and smaller-diameter intake manifold hoses that have minimal exposure to underhood heat.

Hose inspections are relatively simple if, when the engine is fully warmed up, we begin by looking for any unusual swelling or seepage around the connection point of the hose. If the sides of a hose feel mushy or spongy at full operating pressure and temperature, the hose should be replaced (See Photo 3).

Similarly, if traces of coolant leakage are found around a hose connection, the hose has hardened and will likely leak if it’s reinstalled. If the cooling system is depressurized and the hose isn’t wire-reinforced, the radiator hoses can be evaluated by squeezing the sides together. Again, the rubber should feel firm to the touch. If the rubber feels soft or spongy, the hose is a candidate for recommended replacement. If the hose is so hard that it has lost its elasticity, it also becomes a candidate for replacement (See Photo 4). 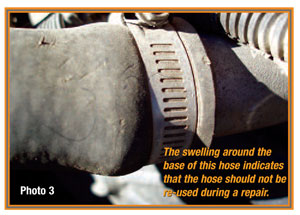 WHEN TO SELL HOSES
Let’s face it: Because of the complexity of modern cooling systems, hose access issues and today’s relatively higher labor rates, it’s tough to sell a complete cooling system hose replacement. In many cases, a complete replacement isn’t absolutely necessary because most of the hoses might be in good condition. On the other hand, if a component like a heater core, water pump, radiator or engine is being removed or replaced, the only significant cost to the consumer is the cost of the hoses themselves.

Keep in mind that re-clamping an old, hardened hose brings with it a potential liability issue. If you’re the shop that reinstalled that old hose, perhaps you’re not pursuing what is called “due diligence” in performing a reliable repair. If an engine is ruined because the old hose fails, you may not be following due diligence principle, at least not in the eyes of some legal experts.

It’s also important to emphasize to the customer how much more expensive it will be to replace the hoses at a later date when the issue of hose accessibility must be fully addressed. On some imports, accessibility issues might account for hours of additional labor time, not to mention the difficulty of performing a reliable installation within the confines of a tight engine compartment.

Gary Goms is a former educator and shop owner who remains active in the aftermarket service industry. Gary is an ASE-certified Master Automobile Technician (CMAT) and has earned the L1 advanced engine performance certification. He is also a graduate of Colorado State University and belongs to the Automotive Service Association (ASA) and the Society of Automotive Engineers (SAE).