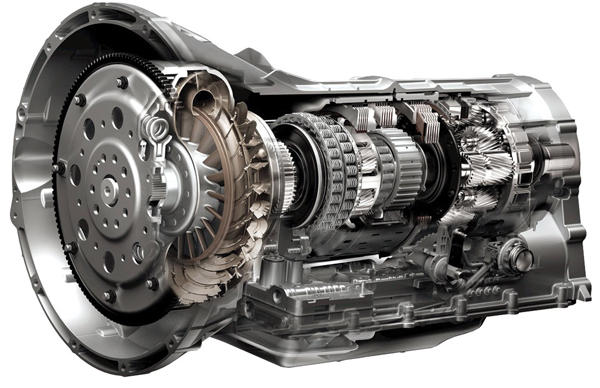 To prevent any service from being over sold or under sold, it is important to not only know that a particular service should be performed, but also why it should be performed. That knowledge can also help you spot when to recommend that service, and when not to. When speaking about transmission fluid, the short version of the explanation is that it gets dirty and wears out.

Eventually, the fluid is so ground up, cooked and contaminated that it should be replaced with fresh fluid. It is important for the fluid to be in good condition because it serves to lubricate the components.
It is all too often that a customer will notice a shifting or engagement problem, then take their car in to have the transmission serviced thinking that will fix it. Just about the only transmission operating concern that stands a chance of being corrected with fluid replacement is a brief light shudder during TCC and/or certain speed engagements.

Normally, any other symptom is a sign that something is failing inside the transmission. Of course, like all things that begin to fail and cause a few symptoms here and there, the symptoms will become more exaggerated as the failing parts inside get worse.

Naturally, when the vehicle becomes not drivable, they are screaming that it wasn’t like that before you worked on it. On all accounts, that may be true; it wasn’t like that … they could still drive it before. However, it didn’t become “like that” because you “worked on it.”  It became “like that” because whatever it was that was wearing out got worse.

In this day of electronic transmissions, worn parts in the transmission can stay hidden until the day they completely give up all together. The PCM will do things like raise line pressure and change a clutch’s engagement timing to compensate for worn parts until it can no longer compensate for them.

Sometimes, just disconnecting a battery so that the PCM has to start over learning how to hide these problems can reveal just how bad off some people’s transmissions really are.

To help protect against that, preparation to service a transmission begins at the write-up of the repair order. Should a customer come into the shop requesting a transmission service, the question of why they would like the service to be performed should be asked in a diplomatic manner. Listen to your customer’s response. They don’t always say directly that they have noticed a shifting problem. Sometimes they tell you that they’ve noticed a problem, while trying to tell you that they don’t have a problem; “It works fine, I can just tell it’s time to service it.” Wait a minute… how can you “tell” it’s time to service it?

Always explain to your customer that a transmission service is like an oil change for the transmission. Explain to them that replacing the oil in the transmission has about the same chance of fixing a rattling noise in an engine; the chances are slim to none. Add to any final paperwork that the customer has been advised to the effect that there is no promises from your shop that it will correct any shifting problem. If any shifting issues have been reported, be sure to list them on the final paperwork.

After the write up, especially if no problems were mentioned by the customer, the vehicle should be test driven before the service.  The technician should note engagement time into drive and reverse from the park and neutral positions. Listen for whining noises (gear sets making noise). Also, delayed shifts, shudders and check engine light and flashing overdrive lights should be noted on the repair order.

It is ideal if these inspections can begin with a cold vehicle. Then repeat the park to drive and reverse engagement inspection again after the test drive on a hot transmission.  Valves and solenoids do stick at certain temps and not at others.

Once the test drive is completed, an in-bay inspection should be performed. Note any fluid leaks at all, not just transmission leaks, to protect against the customer later playing the “ever-since-you” card.  Inspect the fluid level and quality.  Look for signs of water showing up as pink swirls in the fluid (possible leaking transmission cooler).  Smell the fluid to make sure it doesn’t smell burnt like a slipping clutch.  Also, if the fluid is red and fresh looking, it is time to talk to the customer again about their request for a trans service. They might be trying to fix something or leave you holding the bag over something. The same can also be true if the fluid level is a quart or more over full. It is a natural tendency for a customer to automatically add fluid to a troublesome transmission as a first-aid attempt to correct a shifting problem.

Traditionally, there are two types of transmission services, though some designs don’t follow tradition. Typically, there is the pan and filter service and then there is the total fluid exchange; each have their pros and cons.

2. Remove more bolts until there are only some on one side. Leave one side with loose bolts so that the pan will tilt to further drain.

3. After the draining has stopped, push the pan straight back up against the transmission with one hand and remove the remaining bolts. Lower the pan in a level fashion. 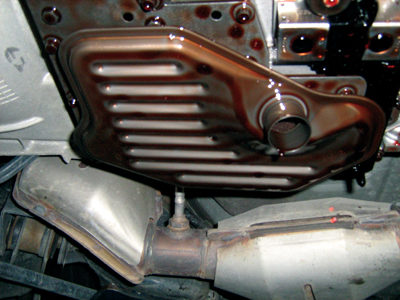 6. Compare the filter that was removed to the filter supplied by the part’s supplier. Carefully examine both sides. 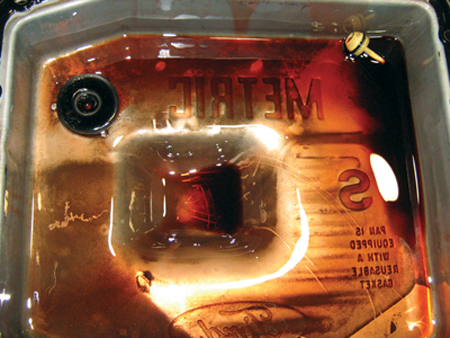 9. Many transmissions are equipped with a reusable gasket. If it does have the reusable gasket, inspect it for nicks and wipe it dry. If the gasket is not damaged, or was not previously leaking, it is best to reuse it. Many times, if the gasket is reusable, the pan will have a sticker or be embossed with a message stating so.

10. Install the pan and hand torque with a 1/4” drive ratchet.  Generally, the bolts only need to be tightened approximately 1/4 to 1/2 of a turn after the heads of the bolt have reached the pan. However, you should find torque specs in your repair information source for the pan bolts.

12.  Fill the transmission through the dipstick tube, or fill through the designated fill port with the specified tool on dipstick-less trans. Be sure to follow level adjusting instructions.

13. After filling is complete, be sure to allow the vehicle to run on the lift and inspect for leakage.

Cons of Filter Service:
• Only changing about half of the total capacity (assuming the T/C has no drain method).
• The fresh and clean fluid may appear as dirty as the old fluid before the service.
• Potential liability to future pan gasket leakage.
• The possibility of allowing debris to enter the valve body during filter replacement.
• The possibility of a worn front pump not being able to prime back up after pan and valve body drainage allows air into the system.
• Risk of a large mess from the “butter fingers” effect.
• Sometimes having to deal with removal of an extremely hardened and stuck gasket. 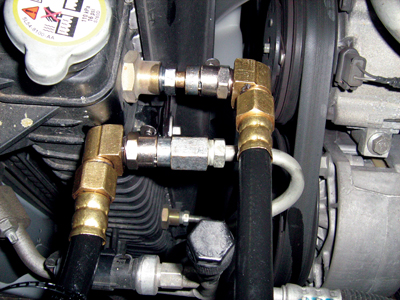 Another type of service is a fluid exchange service. Some people call this a “flush.”  Very inappropriately, some people go so far as to call it a “back” flush.  There is no “back” flushing occurring in this service. The term “back” flushing suggests that the machine used will push fluid backwards through its normal path. That is not true. What simply happens is the transmission pumps the fluid out by use of its pump, and the machine refills the transmission at the same rate as what comes out.  There are two main styles of flush machines. Some are used with the pan off (direct valve body hook-up), and some are used with the pan on (cooler line hook-up).

1. Fill the machine as directed with about two extra quarts of fluid than the transmission and torque converter’s total capacity.
2. Select the easiest way to access transmission cooler line.
3. Disconnect the line and install the appropriate adapters.
4. Connect the machine’s hoses to the adapters.
5. Supply power to the machine, start the engine and let it idle, and turn the machine on. Wait for the exchange process to complete.

Some transmissions will need to be completely warmed up before a fluid exchange service can take place.  That is because some transmission’s cooler line flow is thermostatically controlled, such as Ford’s five- and six-speed automatic transmissions commonly found in newer Explorers.  Typically, a flush machine will have some type of flow indicator.  The fluid can only properly exchange if flow is present through the cooler lines. Driving the trans before hand and light brake torqueing can be used to keep the transmission warm during the fluid exchange process.

Pros to fluid exchange:
• Virtually total fluid replacement, only a minute amount of old fluid will remain.
• Fluid will usually appear very clean on the dipstick afterwards.
• The transmission is never drained, therefore no air enters the hydraulic system.
• Fewer steps than pan service.
• Some machines allow the tech to be freed up to perform other services while the fluid is being replaced.

Cons to fluid exchange:
• The filter is not replaced.
• The debris is not removed from the pan.
• The technician is not able to inspect the type and quantity of the debris to spot pending failure.
• Risk of damage to cooler lines.
• Having to maintain a very large number of adapters on hand for the various makes of vehicles.

Always use the manufacturer’s recommended fluid type.  Some transmissions can be severely damaged from use of the wrong type of fluid. One such example is the Continuously Variable Transmission (CVT) found in the newer model Ford, like the Five Hundred and the Freestyle.

Other makes also have vary specific fluid requirements. Use of the wrong type can cause anything from some light shuddering to complete transmission destruction.  Be sure to check fluid type and filling procedures.