Cooling system problems will present themselves in a variety of ways, and it’s important that your service writer has the skills to ask the correct questions that will help your techs make efficient repairs.

This month, we’re going to take a look at the cooling system on the Hyundai line of vehicles. While the information is applicable to any Hyundai, ­including the Accent, Elantra and Sonata, it is also relevant to any of the cars that are in your bays.

Cooling system problems will present themselves in a variety of ways, and it’s important that your service writer has the skills to ask the correct questions that will help your techs make efficient repairs. Some are straightforward, but if the car is leaving puddles of coolant whenever it’s parked there isn’t much more you need to know. On the other hand, there are times when a seemingly unrelated complaint will turn out to be a cooling system issue that will be easy to identify, but the tech has to know where to look. The most common of these is a no- or ­intermittent-heat complaint. 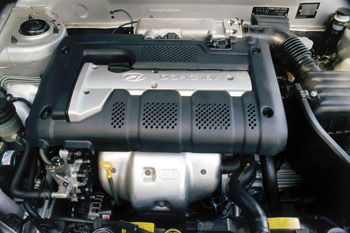 FILLING PROCEDURE
The first step when dealing with any problem that involves the cooling system is to be sure the system is full and all the air is bled out. And a no-heat complaint isn’t any different in that respect: A common mistake for an inexperienced tech is to take a quick look at the coolant reservoir or overflow bottle and assume that if the level is good, then the system is full. But that may not be the case — you have to be sure to check the level in the pressurized system. If the reservoir isn’t low, but the radiator level is, it’s an indication that there is either a leak in the system or a bad radiator cap. Even a slight leak will prevent the system from making enough vacuum to pull coolant from the bottle. In a well-sealed system a bad cap will often result in a collapsed hose.

I mentioned bleeding the system, and I don’t think any experienced tech hasn’t struggled with a tough case of an air-locked cooling system. The good news is that a Hyundai doesn’t usually present a problem. If the system needs to be topped up with any amount of coolant, treat it as you would an initial fill. Attach the funnel to the fill point, getting the coolant higher than any part of the cooling system. Turn the heater control to hot and allow the engine to warm up. There are a few things we can learn as the car warms up. This is a good time to take a hard look at the system for any of that telltale staining that ­indicates coolant has been escaping. First, take a look at the radiator condition.

Keep in mind what the customer has reported; if the complaint is overheating and the correct questions were asked, you know the “when” and the “how.” If the car gets hot in a hurry and has boiled over, keep a close eye on the temp as the engine warms up, in the event that the thermostat is stuck closed; it won’t take long for the engine to reach temp with no flow to the radiator. An infrared temp gun is a big help when looking at the thermostat opening temp. Just take a look at engine-side temp versus the radiator side, and you can tell when and if the valve has opened. Another indication of flow will be the coolant movement in the filler funnel and temperature change when the thermostat opens, usually accompanied by the bubbles caused by the air being displaced by coolant.

At this point, you should have hot air coming out of the heater vents and the cooling fans should have cycled, eliminating that question mark of whether the car was getting warm at low speeds and idle. Now you can be confident the system is full. But before you remove the funnel, hold the idle speed up to about 1,200 rpm and look for a small stream of bubbles working its way through the coolant. While not conclusive evidence, the bubbles are an indication of a head gasket that’s not doing its job and should be kept in mind as we continue the diagnostic process.

PRESSURE TESTING
With no problems being identified during the filling procedure, the next step is to pressure-test the system. We should all be familiar with the procedure. While the tools vary, as long as we pressurize the coolant in a full system we will be able to identify any leaks. Hyundais are no different than any other vehicle when it comes to where to look for leaks; patience will pay dividends. Maintain the pressure long enough so any leaks will show. Large leaks will be easy to find — it’s the slight ones that can be challenging.

At this point we know the system was low, but have no idea how long it took to get low enough for the customer to notice. By leaving the pressure tester installed while we check other parts of the system, the slight leaks will eventually show up under the engine and a little detective work will lead you to the leak. There are plenty of hoses that can cause an elusive leak.

Be sure to take a hard look at the spots where you noticed any evidence of leakage in your initial inspection. If the vehicle is equipped with a pressurized expansion tank, as is the case for most of the Hyundai SUVs, make sure there is no leakage from the tank. While there are no pattern failures in the Hyundai cooling system, we have had some issues with these tanks.

With the system still under pressure and the vehicle on a lift, any leakage from the radiator area should be obvious. What won’t be as obvious is a leaking water pump seal. When it comes to pump leakage, the staining evidence may be the only indication you’ll have, since it’s not unusual for the pump seals to leak inconsistently. It’s also not ­uncommon for the pump seal to show no leakage in the shop but, after the car is driven and parked, the leak is obvious. Another thing to keep in mind when looking at pump leakage is that the coolant can take some interesting paths as it works its way from the weep hole in the housing, to where it finally shows up as a drip under the engine.

ROAD-TESTING
So we have this Hyundai in the bay that came in with a complaint of running hot. We check the coolant level and find it to be a little low. We top it off, do a pressure test and don’t find any leaks to speak of. What is our next step? It’s time to take it on the road and see if we can duplicate the complaint. If the service writer asked the correct questions, we have some idea of when the problem occurs, but we have to take the customer’s input with a small grain of salt. While customers won’t lie about a problem, we don’t really know how attentive they are.

When I road-test an overheat problem, I like to hook up a scanner and monitor the engine coolant temp on the scanner as well as on the dash gauge. Doing this confirms that the gauge is reading properly and eliminates another question mark in the process. We’ve had more than one Hyundai with bad grounds that had the gauge showing hot, while the coolant temp was well within specs. It’s not unusual for this problem not to show up until the car is driven with the electrical system loaded.

The first step of the road-test finds us on the interstate pulling some hills to see how the system handles the high loads. We’ll also monitor the heater output at the vents, looking for air working its way back into the system, a strong indicator of a head gasket issue. Another indicator is the temp gauge going much lower; remember, the sender doesn’t read hot air, only coolant. If the temp climbs on the uphill pulls, make note of how it reacts as you return to a less-loaded condition by dropping the speed and avoiding hills.

If the temperature returns to normal, suspect a poor-flow condition caused by a plugged radiator or a thermostat that’s not opening fully. With no problem picked up on the high-speed road-test, leave the vehicle running when you return to the shop and confirm that the cooling fans are cycling as expected.

REPAIR OPTIONS
Now that we’ve topped up and bled the system and we’ve taken it on the road, it’s time to evaluate where we are and what course of action we’re going to take. If we were faced with increased temp under load, but no indication of a head gasket problem, it’s time to take another look at the radiator to decide if we’re going to recommend both a radiator and thermostat, or just the thermostat at this point. If the coolant is clean and appears to have been serviced regularly, and the cooling fins are in good shape, it pays to go with only a thermostat replacement. As always, be sure to use a quality part that’s designed for the job; Hyundais are very sensitive to coolant temperature when running the OBD II monitors for an emissions ­inspection; so don’t cause a problem while repairing ­another.

If you think you’re looking at a head gasket problem, don’t head into it lightly. While the bubbles in the funnel during the fill process, and losing heat and running hot on the highway, are solid indicators, I wouldn’t proceed without confirming the problem with a cylinder leak-down test. We won’t go into the procedure here, as it’s been covered before and can be found on www.import-car.com by searching for “head gasket.” One useful article is Cylinder Head Gasket Service Essentials.

When all is said and done, Hyundais offers no new challenges when it comes to diagnosing cooling system leaks or problems. We all should have the tools, skills and experience necessary to handle the work, and with good parts availability, there is no reason we shouldn’t welcome these cars into our bays. When it comes to service information, you can’t really ask for better. If you haven’t already, set your browser to www.hmaservice.com and register for the no-charge factory service information.