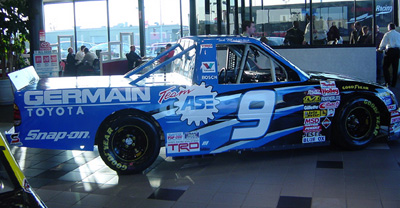 Team ASE was looking forward to joining defending NASCAR Craftsman Truck Series champion Ted Musgrave at Ultra Motorsports for the upcoming 2006 season, but Ultra Motorsports Team owner Jim Smith surprised everyone by closing its doors just weeks before the start of the season. 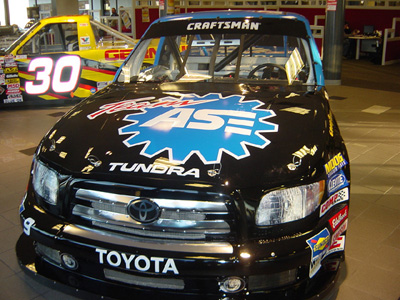 “As one of the original sponsors of the NCTS series, Team ASE is excited to partner with Germain Racing, who clearly demonstrated their intent to win during the 2005 Season, along with the opportunity to stay with Ted Musgrave,” said Ron Weiner, ASE president. “Ted represents the best ideals of NASCAR, ASE and Germain Motor Company and we’re proud to have the opportunity for him to carry the ASE banner for 2006.

For Bob, Steve and Rick Germain to have a great organization like Team ASE on board with the Germain Racing family is an exciting opportunity to begin the 2006 season.

“Our dealerships have had a long standing relationship with ASE, so it’s very exciting to have them become a sponsor of the Germain Racing Team,” said Bob Germain. “We look forward to building a long term relationship.”

Snap-on Tools will also join Team ASE on the No. 9 Team ASE/Germain Toyota Tundra as an associate sponsor. The No. 30 Germain Motor Co. Toyota Tundra of Todd Bodine will also carry both the Team ASE logo and Snap-On logos, which will be displayed on the side of Bodines’ Tundra.