Taking The 'Ho-Hum' Out of Ride Control Sales

Because it’s true that the auto manufacturers have greatly increased the quality of their ride and stability control systems during the past decade, it’s easy to take a ho-hum attitude toward selling ride and stability control products. Nevertheless, we should remember that springs, shock absorbers and MacPherson struts wear out just like tires, brakes and other expendable parts.

To illustrate that point, a long-time customer of mine recently complained about his 1988 Nissan Pathfinder not handling like it did when he bought it brand-new. The inspection was pretty simple. A rebound test indicated that very little dampening capability existed on the front passenger-side shock absorber. The driver’s-side shock was firmer, but the Nissan’s torsion bars had begun to sag from 16 years of high-country fishing expeditions and five years of transporting household goods by the man’s college-aged daughter.

THE SPRING AND SHOCK RELATIONSHIP
Not that the ailing Pathfinder represents new technology, but the case does illustrate how springs, shocks and struts wear so gradually that most drivers aren’t aware that they have a ride and stability control problem until the vehicle is driven on a long trip. On long trips, the oil in the shocks begins to foam and overheat, and the driver becomes aware of an unusual amount of pitching and yawing on long, undulating highways. 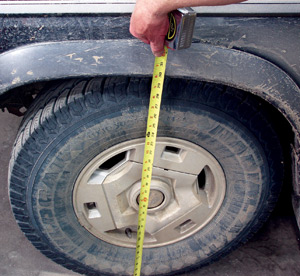 So it was in the case of my retired engineer customer, when he became aware that “something wasn’t right” in the way the vehicle drove. At first glance, it was easy to see that the Nissan’s suspension height was extremely low on the driver’s side. See Photo 1. 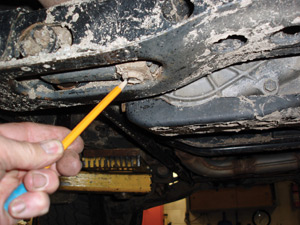 The issue of whether to replace two or four shock absorbers came up next. Given that the fellow is living on a retirement income and the vehicle is 21 years old, replacing just two shock absorbers seemed to be the most prudent way to go. But when I drove the vehicle into the service bay, I noticed the rear of the vehicle pitching upward when the wheels rolled over a drainage bump in the concrete apron outside the shop door. I call that bump my “ride control test bump.” As modest as it might be, that little bump in the cement has sold many thousands of dollars’ worth of shocks and struts.

While recognizing the customer’s financial concerns, I explained to him that replacing only the front shock absorbers would aggravate the pitching sensation in the rear, especially on the rough terrain encountered during his summertime fishing expeditions. In this case, I recommended an “OE-quality” aftermarket shock absorber similar to those I had successfully used on my shop truck a few months earlier because this grade of shock absorber offers a decent level of performance at an affordable price.

RIDE CONTROL EXPECTATIONS
Again using the ’88 Nissan as an example, a good ride control salesman should consider how a vehicle is used and what the customer’s expectations of that vehicle are before recommending a ride control solution. 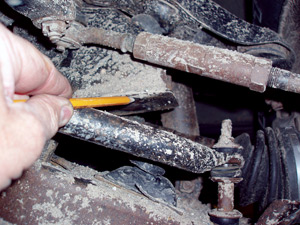 First, no shock absorber can perform as it should without the benefit of the correct ride height or suspension travel provided by good springs. In the Nissan’s case, the front suspension had sagged so badly that the shock absorbers had very little travel left, so selling new shock absorbers would have solved only half of the customer’s ride and stability control complaints. See Photo 3.

Next, I had to remember that the customer is a senior citizen who, in all likelihood, values soft ride characteristics. While a youthful off-road enthusiast might be attracted to a hard-riding performance shock absorber, installing such a shock on a vehicle owned by a 75-year-old senior might create still another complaint.

To prove my point, I’ve taken off brand-new “super-duty” shocks that were sold to a senior driver by an overenthusiastic ride control salesman. In another case, I’ve had at least one discriminating Lexus customer who wanted only original equipment struts to be installed on his pristine ’90s vintage Lexus. So, it’s safe to say that the shock or strut that you sell depends very much on the performance expectations of the vehicle owner.

OFF-ROAD AND ROUGH-ROAD SUSPENSIONS
If your shop performs suspension modifications for off-road and heavy-duty use vehicles, it’s important to understand that spring and shock performance is related. As a rule of thumb, remember that the stiffer the spring rate, the softer the shock absorber required to provide ride and stability control.

If stiff shocks are combined with stiff springs, the suspension becomes too rigid to provide ride control and enough suspension travel for normal driving. Similarly, while a stiffer gas-filled shock can provide a slightly increased ride height and stability control with softer springs, it can’t provide enough suspension travel to establish good rebound control for off-road or rough-road driving conditions. In these applications, the greater amount of suspension travel provided by stiffer or taller springs is required to help the shock absorber dampen the bumps and dips encountered in off-road and rough road driving.

MODERN-ERA RIDE AND STABILITY CONTROL
In today’s market, we’re finding ourselves dealing with electronically controlled suspension systems that can sometimes be very complex in nature. Because some new vehicle stability control systems are networked with other operating systems in the vehicle, and use this information to help stabilize the vehicle during emergency driving situations, it’s important to not modify any suspension components. Instead, the suspension should be restored to manufacturer’s standards during any type of suspension service.

On another note, shops were often forced in years past to re-install weak springs and worn strut boots, support bearings, and rebound bumpers on new strut installations simply because those parts were difficult or impossible to find, or because they were collectively too expensive. In response to that situation, some aftermarket manufacturers are now providing complete MacPherson strut assemblies that include new springs and pivot support bearings with the strut assembly. Considering the downtime created by trying to locate support bearings, boots, springs and rebound bumpers individually during a strut replacement, the extra cost of the assembly can well be worth it to both shop and customer in terms of labor costs and quality control.

DON’T BE COMPLACENT
Too many shops leave too much money on the table by not pursuing ride and stability control issues. Customers often notice that their imports are bouncing higher on the dips and bumps and swaying a little more on the sharp corners, but are often at a loss to explain that issue to service writers who might be more intent on selling wiper blades and washer fluid on routine service stops.

Just recently, for example, I’ve noticed a chucking sound in the front suspension of my SUV that varies in intensity according to road surface. Sometimes I hear it, sometimes I don’t. But at 70,000 miles, that minor clucking sound nevertheless indicates that the strut rod bushings are worn and the struts are in need of replacement. The only problem is, I’ll have to sell that pair of struts to the toughest and most reluctant customer in the world…