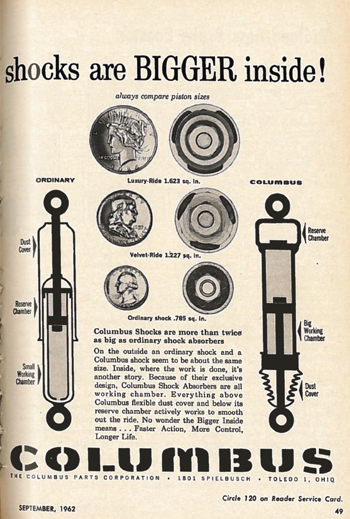 When the monotube design was invented back in the 1950s, it was a revolutionary breakthrough in shock absorber technology. The floating piston and high pressure gas charge solved the foaming problem that had plagued conventional hydraulic shocks for a long time. When the fluid foams, the tiny bubbles offer less resistance to the motions of the piston causing the dampening characteristics of the shock to fade. This allows more wheel bounce and suspension motion and hurts handling. So when the first monotube gas charged shocks came out, it made a dramatic improvement in handling control.

The gas charged monotube design was invented by a Frenchman named DeCarbon, who worked with a German shock manufacturer names Bilstein to get his design patented in 1956. Two years later, Mercedes became the first auto maker to install monotube shocks as original equipment on some of their cars.

Because the gas charged monotube design was protected by patents, Bilstein had a monopoly on the technology up until 1971 when their patents expired. Other shock manufacturers, such as Koni, KYB, Tokiko, Monroe and Sachs, began producing monotube shocks of their own, and also added gas charging to many conventional twin-tube shocks. 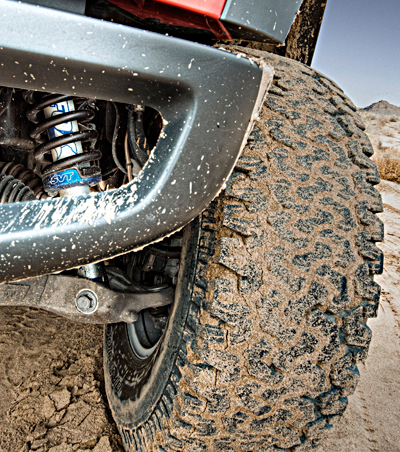 In addition to reducing fluid foaming for better ride control (which is the gas-charged monotube shocks main advantage), the design has additional advantages over a conventional twin-tube shock:

•    The monotube shock provides better heat dissipation and cooling than a twin-tube shock. There is no outer tube or fluid reservoir to inhibit heat flow, so the monotube shock runs cooler and delivers more consistent ride control.

•    A monotube shock is lighter than a twin-tube shock that has the same external diameter. This reduces unsprung weight and allows the wheels and tires to follow the road more closely.
•    A monotube shock can be mounted in any position (right side up, upside down or even sideways) and still work. A twin-tube shock uses gravity to drain the fluid down through the valving in the bottom, and to maintain the gas charge in the outer reservoir. But a monotube has a floating piston and no reservoir, so the orientation of the shock does not matter. On racing applications, such as Formula One or Indy Cars, the shocks can be mounted sideways inside the body to reduce drag for better aerodynamics.

•    A monotube shock has a larger diameter piston than a twin-tube shock that has the same external dimensions, which gives the shock greater sensitivity for small piston motions.

•    Monotube shocks are used for may coil-over applications because of their compact design. Many of these applications also feature adjustable valving so the ride characteristics can be fine tuned or changed depending on how the vehicle is being driven.

Shocks use valves to control the flow of the oil. Valves are located either in the piston or at the base of the shock. The rate of flow will control how much force it takes to move the piston.

Valving works in both directions of compression and rebound, and in most shocks, both are independent rates of dampening.

Valving in most replacement shocks is vehicle specific. When a vehicle is designed, the shock or strut is designed to dampen certain spring rates, work with a specific tire package and tuned to vehicle dynamics desired by the OEM.

This is important to remember when selecting a replacement. A replacement that is too stiff could create a ride complaint from the customer. Conventional shocks and struts are sometimes limited by their valving. Their performance is generally a compromise between a comfortable ride and one that is more controlled.

DIAGNOSIS
A test ride is probably the best way to detect weak shocks or struts that need to be replaced, but a traditional bounce test is still a quick way to check for weak dampers, too. If the suspension bounces more than once after rocking and releasing the bumper, chances are the original shocks or struts are worn and should be replaced to restore safe handling.

A visual inspection of the shocks and struts should always be made anytime a vehicle has a tire wear problem, or you are doing an alignment, brake job or other undercar repairs or service work. Look for obvious signs of trouble such as fluid leaks, severe corrosion, broken or damaged mounts, signs of suspension bottoming, or cupped wear on any of the tires.

If you discover a shock or strut that has a problem or is getting weak, bring it to your customer’s attention and offer to replace their old shocks or struts with new ones. You should also ask them about their driving needs, what kind of ride they prefer, then discuss any possible suspension upgrades that would be a benefit to them. You might discuss the advantages of upgrading to some type of performance shock (gas-charged monotube) or adjustable dampers if that type of product would be of interest. 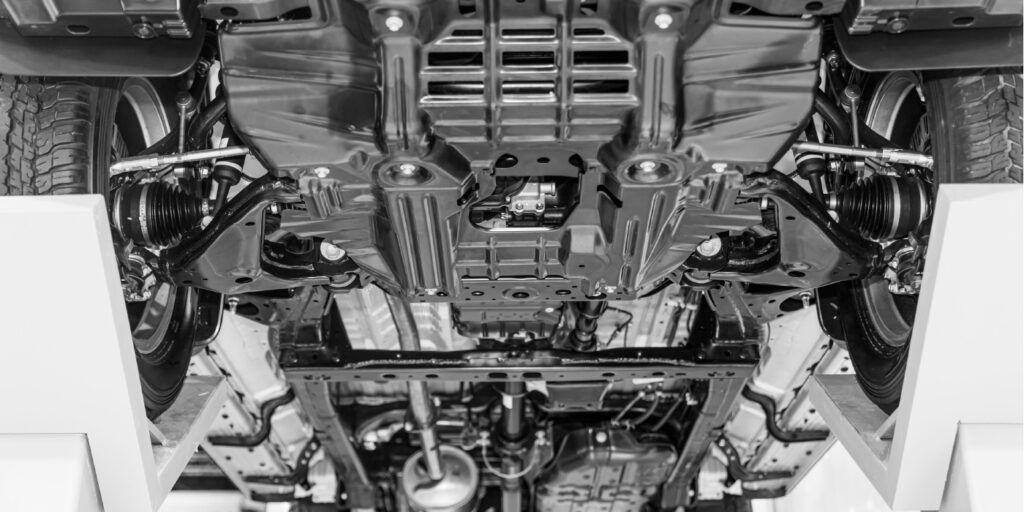 Your typical customer is not like you; their point of view is completely different. You must understand what they know and what they value when it comes to their transportation. The old proverb “walk a mile in their shoes” applies to advising customers about shocks and struts.

Selling ride control is difficult. If you just sell them shocks and struts, you are asking the customer to exchange money for a parts and service. Advising and educating a customer about the condition of their car or truck is easy. Presenting your customer with inspection results and benefits of replacement will sell the job without even asking for the sale.