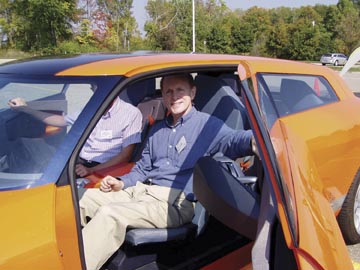 The bright orange Novanta concept car has a futuristic yet contemporary look that is more evolutionary than revolutionary. The car is built on a SAAB 95 chassis with a 3.0L V6 engine and automatic transmission. It’s fully driveable (unlike many concept cars), but lacks basic amenities that would be on a real production car such as air conditioning, windshield wipers, external mirrors and cup holders. 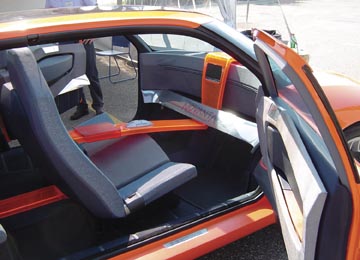 The real story is inside this vehicle. When you open the door, you immediately notice there is no steering column. Also absent are the gas and brake pedals. There’s not even a gear shift. Novanta relies entirely on drive-by-wire technology from SKF to control all major driving systems. Compared to most of today’s vehicles, the interior is almost spartan. 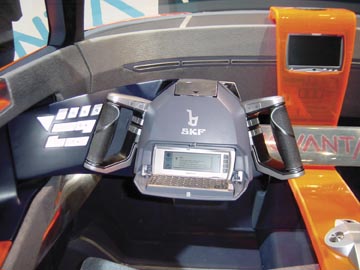 When the driver enters the vehicle and closes the door, the “Guida” driver control unit folds out of the door on a pivot arm. Steering, throttle control, braking and transmission mode selection are on the driver control unit. The steering yokes have twist handles that control vehicle acceleration somewhat like the twist-throttle on a motorcycle, and the brakes are applied by squeezing paddles on the backs of the yokes.

The driver control unit is connected via a closed loop control circuit to the main steering Smart Electro-Mechanical Actuating Unit (SEMAU). A motorized actuator inside the driver control unit generates feedback when the wheels are steered to simulate steering effort and road feel. Once you get the hang of using the twist grips to accelerate and squeezing the grips to brake, it’s as easy to drive as any vehicle with conventional steering and brakes.

The SKF steer-by-wire system uses a smart electro-mechanical steering actuator instead of a conventional rack and pinion gear. There is no power steering pump, no pressure hoses, no steering shaft and no physical connection between the driver’s hands and the front wheels. Sensors on the steering yokes send the driver’s steering inputs to a processor, which monitors and controls the position of the front wheels. A feedback loop keeps the wheels and steering inputs in sync with one another, while redundant circuits provide a failsafe backup should anything go wrong.

The braking system is also fully electronic with no hydraulics, no master cylinder, no brake lines and no physical connection between the driver’s foot and the brakes. The calipers are electro-mechanical, developed jointly by Brembo and SKF. An electric motor squeezes the pads against the rotors when the brakes are applied. Braking inputs from the driver steering yokes are routed to a controller that functions like a power-assist anti-lock brake system.