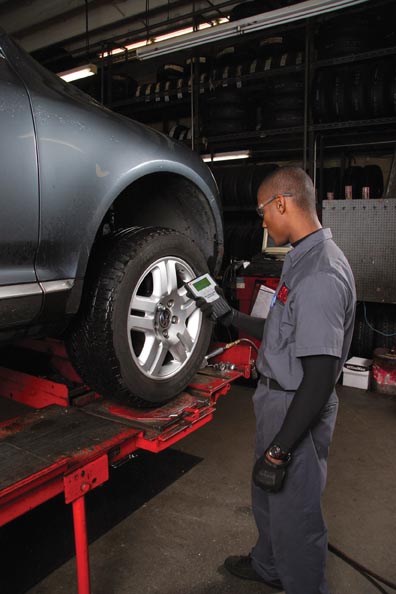 There’s an old television commercial that starts: “How do you spell relief?” Thinking about tire pressure monitoring systems (TPMS) instead of stomachs, a tire dealer might ask himself or herself: “How do I spell opportunity?” Try S-A-F-E-T-Y!

That’s some of the philosophy being used as a selling tool for TPMS by Mountain View Tire and its 29 stores in the greater Los Angeles area and Southern California. Its business mix is 60% tires and 40% service, and annual sales are well over $40 million for the Goodyear brands that comprise 90% of tire sales.

“When we talk to customers about their TPMSs, it’s generally an education session,” said Mike Mitsos, vice president of Mountain View Tire. Mitsos added that many customers don’t even know whether or not they have a TPMS on their cars. That’s an immediate red flag that tells the dealer it’s time to put the sales pitch in motion.

“It’s hard to say what percentage of drivers don’t know if they have TPMS,” Mitsos said. “If they never had a low-pressure indicator light on the dashboard, it’s my guess that they probably don’t know they have that option on their vehicles.

“Obviously, if they have experienced a low-pressure signal, that would generate some curiosity, and those customers would start asking questions.

“Regardless, we tell them that tires have a tendency to lose a few pounds of air pressure per month and that there are many road hazards that cause slow leaks in tires. We further explain the hazards and pitfalls of underinflated tires.

“Then, we explain that the TPMS is a safety benefit and should not be ignored when the TPMS light on the dashboard indicates low air pressure. Then, we generally take out the owner’s manual or pull the information from Alldata and show them the steps and procedures of resetting the system.”

“They are usually very happy to learn about another function of their cars that they hadn’t known before,” commented Mitsos.

Mike and his family are no strangers to customer relations. Mike is one of three sons born to Nick and Irene Mitsos. The only son of Greek immigrants, father Nick worked at the family restaurant after a two-year tour with the 82nd Airborne Division of the U.S. Army. In 1987, and after 18 years in the food-service business, Nick decided to pack up his family and move to California. That year, Nick opened up his first Goodyear retail tire center in Duarte, CA.

A year later, Mike joined his father in the business.

“I worked the counter for six years until I was pulled out to be a district manager when we opened our sixth location in 1994,” said Mike. “Our philosophy is to create a ‘Wow’ experience — make customers say, ‘Wow, you guys are different than anyone else!’”

Mike and his brothers, Paul and Chris, learned a lot from their father who brought “hard work and dedication from the restaurant business,” commented Mike. “My grandfather came to America from Greece in 1923 and arrived on Ellis Island with nothing except the clothes on his back.”

Today, Mike brings the family-learned ethics to the tire business. “If we break a (TPMS) sensor, we fix it,” he said. “We’ll replace it with an OE sensor, not an aftermarket sensor. We want it to be seamless for the customer.”

Repairs notwithstanding, the safety aspect of TPMS, however, is not the only salient point that Mountain View Tire and other dealers are pushing. Many studies have revealed that running tires with too little air pressure is not uncommon. It has been estimated that approximately one out of every four vehicles on the road is running on underinflated tires. To further punctuate the safety aspect, this also means that one out of every four drivers is needlessly sacrificing his or her vehicle’s fuel economy and handling and reducing the tires’ durability and tread life.

And, in these times of fast-rising gas prices, keeping tires inflated to proper levels is not only a safety concern, but an economical one, too. Monitoring tire pressure to keep tires at recommended levels also helps with improved vehicle miles-per-gallon performance.

“This (TPMS) technology is great news for vehicle safety, and it also has the potential to contribute to reduced fuel consumption," stated Jeff Owens, president of Delphi Electronics and Safety. “With oil at more than $65 a barrel and rising, the fuel-savings benefits will increase the attractiveness of this system to drivers and vehicle makers.”

Mitsos agrees with the premise, but what about problems with some of the present systems? “The resetting procedure of the system is different for every car,” Mitsos said.

“That’s a problem. It takes too much time to look up each vehicle’s reset procedure, and then, there is the chore of actually resetting the system, which is not a 10-second task. For every flat repair, every tire rotation, every new tire this must be done.

“It’s a big hassle, but if we want to separate ourselves from the competition, we must be informative and quick to resolve issues, all with a smile. And, I can’t justify charging my customers to reset their TPMSs. “It’s like nitrogen. It’s a great idea, and it works, but who wants to pay for nitrogen or even plain air when consumers have been trained over the years that air is free? I understand eventually we will be backed into a corner and will have to invest in the proper equipment to reset these systems quickly.”

For additional information on resetting procedures, there are a couple of sources: First, TIA has a training guide and course, and the materials can be ordered through its website at www.tireindustry.org or by phone at (800) 876-8372.