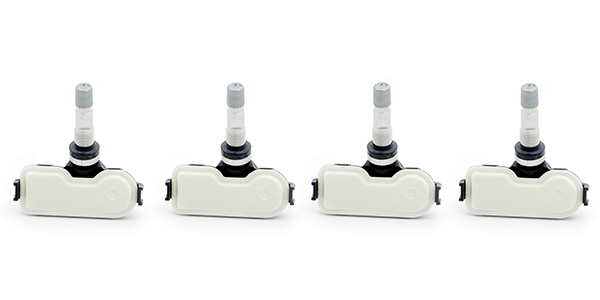 If a single sensor has reached the end of its lifespan, it is highly recommended to replace all sensors at the same time. Similar to headlights, once one sensor dies, the rest are likely to be close behind. This is an important point for your customers to understand. Taking care of the issue before there is a problem also provides a convenience to them.

The lithium ion coin-style batteries inside TPMS sensors may last anywhere from five to 10 years. The battery is suspended in resin and has soldered connections so it can withstand the extremes in vibration and centrifugal force. Other factors that can degrade the sensor overtime include heat from the brakes. But, making a sensor with a battery door for protection is not an option.

The sensors are programmed to report pressures at predetermined intervals. But, the vehicle does not tell the sensors to transmit. This type of two-way communication would result in a very large sensor.

TPMS sensors don’t broadcast a continuous signal, but only broadcast when the vehicle is in motion. Even then, the signal is intermittent to conserve battery life.

But, some sensors transmit at set intervals even if the sensor is moving; these are typically less expensive sensors.

For most sensors, the pressure and temperature transmissions start when the accelerometer detects movement. This means that a low tire condition or updated reading will not be displayed until the vehicle is moving.

The timespan when the sensor turns off because it is no longer moving can range from three minutes to 15 minutes. But, all sensors should activate when a sudden loss of pressure is detected.

If two identical TPMS-equipped vehicles travel 70,000 miles, it is possible for one set of sensors to fail before the other, based on the customer’s drive cycle. If the first vehicle travels the 70,000 miles in 100-mile trips and the second vehicle travels the same distance in 10-mile trips, it is likely that the vehicle with shorter trips will experience the sensor failure sooner. Why? It comes down to the time the sensors take to go to sleep after they have stopped moving.

You could see this on your customers’ vehicles. One could have a sensor last 120,000 miles, while another customer with the same vehicle could have their sensors last only 70,000 miles.

But, it’s critical to remember the four sensors on a vehicle have all endured the same conditions, including transmit times. If a sensor is no longer transmitting and has no physical damage, chances are the other three sensors are not far behind. Some tools can determine sensor signal strength, but this can be highly influenced by the proximity of the sensor to the tool. It is very rare to find a vehicle that will have the status of the batteries as a data PID.

Some sensors will be able to transmit a weak signal with the ID and pressure information. The tool might be able to receive the signal, be it might not make it to the TPMS antenna on the vehicle.

This information can be stored in the tool so a replacement sensor can be reprogrammed or cloned with the existing ID.