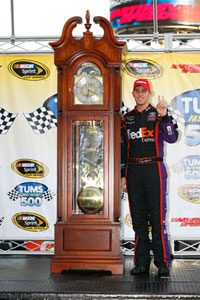 Denny Hamlin and Raybestos Brakes have something special in common … their performance continues to make the competition very nervous. Hamlin closed to within six points of leader Jimmie Johnson in the NASCAR Sprint Cup Series championship standings.

In his No. 11 FedEx Office Toyota, Hamlin held off Mark Martin to win the TUMS Fast Relief 500 Sunday afternoon at Martinsville (VA) Speedway. “Without a doubt, I was out-braking everyone into the corner today” said Hamlin. “It was the most solid brake package I’ve had here at Martinsville so far.”

Hamlin scored his third consecutive Martinsville victory and his fourth in 11 races at the .525-mile speedway. He collected his series-high seventh win of the season and posted his 13th top-five.

The victory by Hamlin continues an impressive performance on short tracks this season by Raybestos brand brakes, a member of the Affinia Group family of brands. Cars using Raybestos brakes scored their TENTH NASCAR Sprint Cup Series win in 2010 and have been on the winning cars for FIVE OF SIX short-track events this season. Cars using Raybestos brand brakes have scored victories in NINE OF TWELVE events on tracks less than a mile in length over the past two seasons.

To gain a competitive advantage at Martinsville, the Joe Gibbs cars used the Raybestos Sprint Cup braking system. The ultra-lightweight aluminum alloy six-piston calipers are the stiffest and lightest calipers available in all of NASCAR. The innovative calipers were developed using the state of the art “optimized design” process from Raybestos technology partner, Alcon. The calipers include an asymmetric body design and advanced between-piston and crossover cooling features. The brake package also provides the largest brake pad volume (surface area) and largest rotor (13.15” outside diameter, and 1.65” thick) available in NASCAR.

“I’m just real proud of everything the manufacturers of Raybestos brakes have put together for this brake package,” Hamlin said. “I hammered ‘em all day long because my car wasn’t handling the way I was hoping to. I’ve had good brakes here in the past but my cars have always been so good I never had to use ‘em. Today I just had to use ‘em a whole lot and they stayed true to me. Couldn’t say enough for all their hard work and everything that they’ve put together to hopefully win us a championship.”

Hamlin continued, “Today you have to race so much harder than what you had to a couple years ago. I know I’m new to this sport but I never remember being as hard on the brakes today as I ever was in the past. It’s good that we’ve got a product that’s standing up to what I’m putting through them and obviously good enough to win races.”

Hamlin started from the pole but fell to 15th-place just 50 laps into the 500-lap event due to excessive temperature buildup on the left rear tire. Mike Ford, Hamlin’s crew chief, decided against making drastic changes to the car.

“We saw a lot of buildup to the left rear, probably four times more than we normally see,” Ford said. “If it was the racecar making it do that we would see it again but we never saw it again all day, just very fortunate to not panic and lose the race right at the beginning.”

From there Hamlin fought his way back into contention. He worked his way into second-place by lap 200 and was never out of contention the rest of the way. He took the lead for the final time when he passed Kevin Harvick on lap 471 and didn’t look back, crossing the finish line 2.318 seconds ahead of runner-up Mark Martin.

The margin between Hamlin and Johnson is the closest between first and second with four races to go in the Chase (2004-present). That fact doesn’t bother Hamlin, especially since the series moves to unpredictable Talladega (AL) Superspeedway next weekend.

For more information on the Raybestos Sprint Cup braking system, or for questions on any Raybestos brand brake or chassis products, visit www.raybestos.com or call (800) 323-0354.