'Rat Rods' are Pieces of Art

Rat rods are working, street-legal vehicles built with parts from various vehicles with added personal touches from their builders. You don’t have to be a professional automotive technician to build a rat rod, but it definitely helps.

‘Rat rods’ built one piece at a time 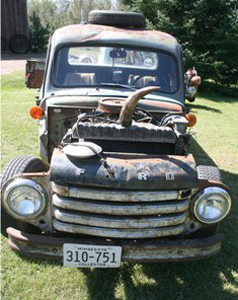 Roger Rentola and Bryan Dagel don’t worry about waxing their quirky vintage vehicles. They are, after all, rat rods.

Unlike their more polished cousins in the antique and street rod family of older automobiles, shine is not necessary for a rat rod to stand out. Neither is a particular production year.

What makes a rat rod a rat rod is really a matter of creativity combined with mechanical know-how, resulting in a sort of mobile collage that comes together to make one vehicle.

Rentola’s truck, for example, was lovingly constructed from several trucks, vans, cars and a school bus, along with a beer keg, a cow horn, a couple of street signs and an antique Boy Scout canteen. Come to think of it, Rentola’s truck looks more like it came straight out of the Disney-Pixar movie “Cars” than the Johnny Cash song about a factory worker who stole the parts to build his own car over a matter of years.

To read the entire article, visit the Duluth News Tribune website at http://www.duluthnewstribune.com/event/article/id/178092/.