Platinum miners in South Africa went on strike toward the end of January. This situation half a world away could have real impact on the price, sales and safety of catalytic converters. Also, read how some resourceful shops are marketing services to guard against the rise in catalytic converter thefts.

News broke during production of the February issue of UnderHood Service that platinum miners in South Africa went on strike. This stoppage in platinum mining carries a butterfly effect potential for the U.S. aftermarket.
Vehicles cannot meet today’s environmental standards without precious metals. Platinum is one of the key catalyzing, emissions-reducing elements within a catalytic converter. An average catalytic converter contains several hundred dollars worth of platinum, palladium and rhodium.
A butterfly effect in chaos theory refers to how a small change in one place can result in large differences down the road in a different time or distant place. A labor issue in another country is no small issue, but that situation half a world away could have real impact on the price, sales and safety of catalytic converters.
Labor unrest background
According to reports, around 70,000 employees from the world’s three biggest platinum producers — Anglo American Platinum, Impala Platinum and Lonmin Platinum — are participating in the strike. The mines employing those 70,000 workers are said to contribute 70 to 80 percent of the world’s platinum. A strike of this size will mean a shortage of 9,000 ounces per day.
As of press time, the government was attempting to mediate the labor dispute. For additional reading on the strike itself, head to The Wall Street Journal.
The price of platinum
Stoppages in production occurred at random times starting in November 2013, enough to drop production 5 percent from the previous year. This unrest, prior to the actual strike, already moved the platinum price needle. The metal’s price climbed about 12 percent in the previous month and six percent during a two-month period.
Again, even without knowing how the strike plays out, estimates already show platinum prices to average $1,632/oz. in 2014 and $1,750/oz. in 2015. The price was sitting near $1,480/oz. at press time. In 2011, the post-financial-crisis price of platinum hit its peak of $1,901/oz.
For additional reading on platinum stock and prices, head here. 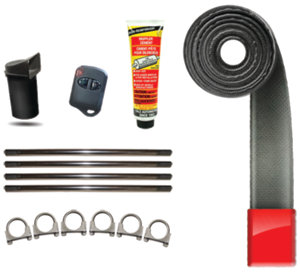 Advertisement
Click Here to Read More
Advertisement
Converter theft deterrents
As the price of platinum goes on the rise, so to will the rate of catalytic converter thefts, especially for trucks and SUVs.
The thefts are already hitting the news in Roseville, Calif. One inventive truck owner successfully thwarted a potential theft by welding a piece of metal rebar across his catalytic converter. Resourceful muffler shops in that area are said to be offering a rebar-welding service for a fee.
For the those without rebar or a welder, there are products on the market that offer similar protection:
• The CatStrap takes advantage of the built-in heat shields in most catalytic converters by routing the strap beneath the shield. If a thief attempts to saw free a catalytic converter, the CatStrap responds with a 125 decibel alarm and hardened steel pins that will actually melt the teeth of the saw blade.
• The CatClamp is installed by placing the split clamp assemblies in place before and after the converter. A cable is then routed through both split clamps and around or through the chassis and back through both split clamps.
Another potential converter crime prevention measure is etching a vehicle’s license plate number into the converter. The Sacramento Bee article about the rebar crime stopper noted that four automotive service shops in the Roseville, Calif., area offer free catalytic converter etchings by appointment.
If catalytic converter thefts start to uptick and make the news in your area, you might consider brushing up on your etching skills or consider selling theft deterrent products.
Advertisement
In this article:Catalytic Converter, Catalytic Converters