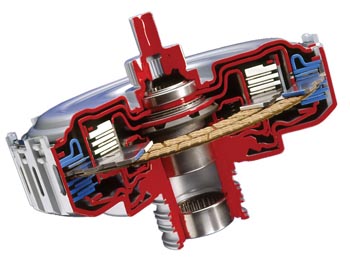 DualTronic transmission technology succeeds in combining the advantages of both systems. This new technology from the global automotive supplier BorgWarner is wet-clutch and control-system technology for automated transmissions.

The new transmission concept has its origins in motorsports. Back in the 1970s, it was Porsche who developed the first dual-clutch gearbox for its Group C Porsche 962. The advanced technology finally made its debut in series production development in 2003 in the VW Golf R32 DSG (direct-shift gearbox) and the Audi TT 3.2. Two wet clutches, each with two input and output shafts and specially developed mechatronics for hydraulic and electronic transmission control, are the key components of this new transmission generation, which BorgWarner developed in collaboration with Volkswagen.

ONE GEAR HEAD: THE PRINCIPLE OF DUALTRONIC
The six-speed DualTronic gearbox has two wet clutches and is essentially two gearboxes in one. One clutch controls the "odd" gears plus reverse, while the other operates the "even" gears. If the driver selects second gear, for example, power is applied directly to the driving wheels. At the same time, however, third gear is engaged and fully synchronized in the other gearbox section. As soon as the ideal shift point is reached, the clutch on the second-gear side opens, the other clutch closes and third gear engages. The transfer of power from the first clutch to the second is absolutely smooth, without any interruption in torque to the drive shaft. In this way, DualTronic technology eliminates the uncomfortable "torque-interrupt" feeling that occurs when a manual or automated manual transmission shifts gears. The result is a smooth, jolt-free gear shift that allows both comfortable and sporty driving. DualTronic also has impressive fuel consumption and emissions ratings, which are around 15% lower compared to conventional automatic transmissions.

For this innovative concept, BorgWarner was presented with the PACE (Premier Automotive Supplier’s Contribution to Excellence) Award in Detroit, USA, in April 2005. This prestigious award recognizes automotive suppliers for superior innovation and technological advancement.

DRY VERSUS WET AND WEAR-FREE
Although it is possible to use either dry or wet clutches for the dual-clutch gearbox, BorgWarner decided in favor of a wet system for the development of its DualTronic. In this method, the clutch system is actively cooled via oil flow when the vehicle is pulling away and during gear shifts. The most important advantage of the wet clutch over the dry clutch system is its longer lifetime. Unlike their dry counterparts, wet clutch plates are wear-free and do not have to be replaced. Another important difference between the systems is their thermal resistance. In a dry clutch system, the heat energy that is generated as a result of friction has to be absorbed by the thermal mass of the clutch system. In a wet clutch, the heat can be actively dissipated by oil cooling. As a result, an overall more stable heat balance is created in the wet system.

GROWING DEMAND FOR DUALTRONIC TECHNOLOGY
BorgWarner is predicting a high demand for DualTronic technology in the next few years, especially on the European market. In Europe, almost 80% of vehicles have a manual transmission. The company expects demand on the European passenger car market to increase to 20% by 2015. In addition to the Volkswagen Group, BorgWarner has already succeeded in convincing two other European OEMs of the benefits of its innovative system. Market launches by the year 2007 are planned. BorgWarner also sees good sales opportunities for the North American and Japanese markets. This growing demand will, above all, be based on the clear advantages that DualTronic technology offers:

– Easy integration of the technology and low development costs for OEMs; and

– Wide range of possible applications: BorgWarner DualTronic can be used over the entire vehicle range – from compact, mid-size vehicles to luxury vehicles, sports cars and SUVs.