Last week, a video was released by NUCAP showing a large SUV braking on a test track and the brakes catching fire. What was the story behind the video? According to NUCAP, this was part of a test to simulate what can happen if a brake pad becomes delaminated and part of the friction material breaks away from the backing plate due to corrosion.
Under controlled conditions, a stock 2016 Chevrolet Tahoe with a gross vehicle weight of 5,608 lbs was outfitted in the front and rear with store-bought brake pads and burnished according to the manufacturer’s specification according to NUCAP.
A series of 60-0 mph ABS assisted stops were performed. With the full brake pads, the stopping distance was an average of 157 feet. To simulate a delamination event caused by corrosion of the backing plate, half of the friction material puck was removed on one inboard brake pad on the right front.

The same series of ABS assisted stops from 60-0 mph were carried out. The stopping distance increased by an additional 46 feet and the flames were seen coming from the area of the caliper. Rust related delamination is more prevalent today through the use of sub-standard steels being used in brake pads like black steel (non-pickled and oiled steel), according to the Global Brake Safety Council’s recent field study. 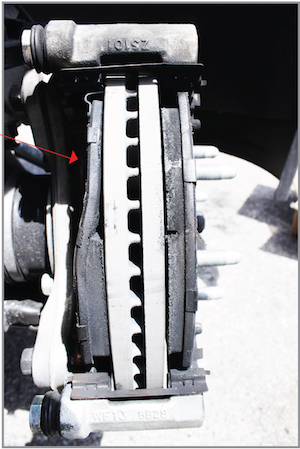 The dual-piston caliper on the Tahoe is designed to evenly apply pressure to the backing plate. If the backing plate is not parallel with the rotor due to missing friction materials the hydraulic force is spent distorting the metal backing plate. A deformed backing plate produces a longer brake pedal with less brake torque generated at the pad and rotor interface. Modern cars with ABS and ESC can stop straight even if there is a significant difference in brake torque between the wheels on an axle. But, the corrections to keep the car straight increase the overall stopping distance.
The ABS sees the delaminated brake pad in the wheel speed sensor’s output. It only knows one wheel is still turning while the other side of the axle that might be on the verge of locking. It does not matter if it is ice on the road or a bad brake pad, a correction is carried out that can increase stopping distances.
The fire was caused by high levels of certain ingredients that produce flammable volatile organic compounds under high temperatures generated by the brakes. This outgassing from the pads can ignite and cause a visible flame. Some manufacturers reduce that possibility of fire by using better materials and manufacturing processes.