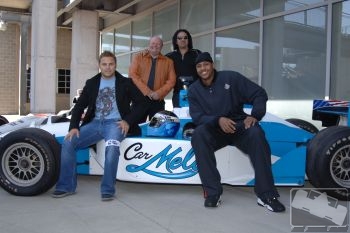 Carmelo Anthony stopped by the Indianapolis Motor Speedway on March 15 before the Denver Nuggets’ NBA game with the Indiana Pacers at nearby Conseco Fieldhouse.

The Denver Nuggets’ star didn’t visit the Speedway to just pass the time between the game and a morning shoot-around. He announced that he has partnered with veteran IndyCar Series team owner Ron Hemelgarn to put rookie driver P.J. Chesson on the track for the 2006 IndyCar Series season.

The team, Carmelo Hemelgarn Racing, will debut at the season-opening Toyota Indy 300 on March 26 at Homestead-Miami Speedway and also filed its entry for the 90th Indianapolis 500 on May 28.

Anthony, in his third season with the Nuggets, has established himself as one of the premier forwards in the NBA. Anthony was an NBA All-Rookie First team selection in 2003-04, the most valuable player of the 2005 “got milk?” NBA Rookie Challenge, and led Syracuse to the 2003 NCAA Men’s Basketball Championship as a freshman.

“Every kid has a dream of owning and driving a race car,” Anthony said. “I have always had a love for cars, especially fast cars, and this is a dream come true. I’ll stick to driving the basketball lane and let P.J. handle the fast lane.”

A luminous star, Anthony stands in stark contrast to Hemelgarn’s silent strength. A private person by his own admission, Hemelgarn steps reluctantly into the spotlight — only by his involvement in, and success at — racing. In his more than two decades as a race team owner, Hemelgarn won the 2000 IndyCar Series championship and 1996 Indianapolis 500 with driver Buddy Lazier and now brings a uniquely driven personality to the track in Chesson.

"Success is not measured by how high you climb, but by how many people you can bring with you,” Hemelgarn said. “Bringing along P.J. Chesson, a proven sprint car and World of Outlaws standout, and NBA superstar Carmelo Anthony will create excitement, a new fan base and attention to the IndyCar Series. The IndyCar Series ratings will climb, sponsorship dollars will climb and so will the Hemelgarn Racing team. I’m excited to have such an opportunity with this unique partnership."

Chesson started racing karts at age 9 and honed his skills on two wheels as an rookie of the year and district champion in AMA motocross. He cut his racing teeth in dirt racing sprint cars for five years, becoming Dirt Cup Champion and a four-time World of Outlaws winner before starting in the Indy Pro Series in 2004, where he won three of nine starts.

“I’ve been given an opportunity to make a difference both on and off the track,” Chesson said. “I look forward to being a part of the Indy Car family, beating the best race car drivers in the world and transcending the most exhilarating sport on Earth.”

The Far Hills, NJ, native is popular with fans for his aggressive driving style and his “Take No Prisoners” attitude. He said he is eager to take the next big step in his racing career and fight for Rookie of the Year honors.

“I can promise you all that when I show up race weekend, I’ll have my spurs in my bag, and they’re usually on when I climb in the race car, which means I’m ready to go,” Chesson said. “I’m going to do the best I can, and the team’s going to do the best they can. We’re going to go out there and cause some trouble.”