Mitchell 1 And ASE Present 2018 Technician Of The Future Award 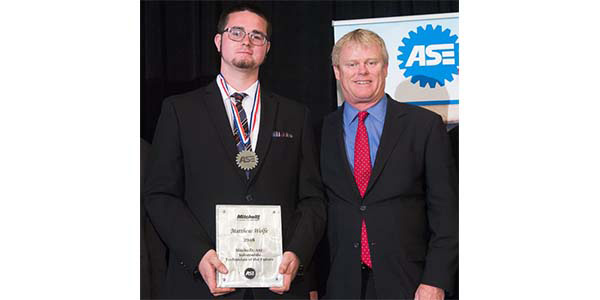 Matthew Wolfe of Rebersburg, Pennsylvania, was named the 2018 Mitchell 1/Automotive Service Excellence (ASE) Technician of the Future during the ASE Fall Board of Governors Meeting and Annual Technician Awards, held recently in Ft. Lauderdale, Florida. Wolfe received a $1,000 cash prize, a one-year subscription to ProDemand auto repair software from Mitchell 1 along with airfare and hotel accommodations to attend the event to receive his award.

“We congratulate Matthew on being named the 2018 Technician of the Future,” said Nick DiVerde, senior marketing director, Mitchell 1. “His accomplishments have demonstrated his commitment to excelling in his chosen field and we know he will be successful in his future endeavors.”

Wolfe said he decided to become an automotive technician because he has always loved figuring out how things work. In his free time he says he enjoys collecting older garden tractors and riding classic motorcycles. He sees the value of his ASE certification as it allows him to have confidence in his automotive knowledge and it’s a way to let customers know that their cars are in good hands.

To qualify to win the Mitchell 1/ASE Technician of the Future award, the winner must be ASE Certified, must have registered as a student and have the highest cumulative test scores on the A4, A5, A6 and A8 tests.