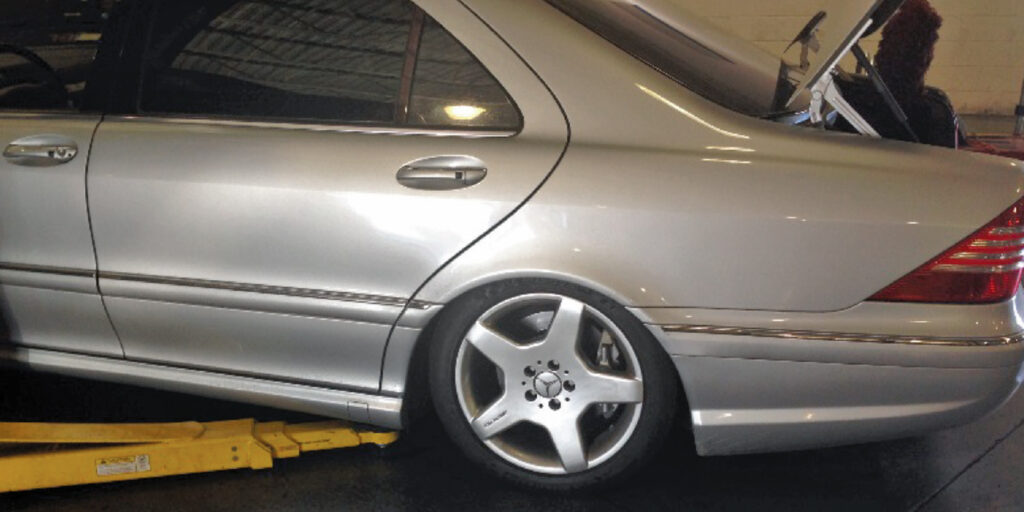 It doesn’t seem that long ago when the closest we came to any kind of active suspension on a Mercedes-Benz was the self-leveling rear suspension systems on the station wagons and 560 models (SEL sedan and the SEC coupe). Of course, there were some exceptions — European models and the 450SEL 6.9 starting in the late ‘70s were available with hydraulic suspension at all four corners.

The majority of active suspension vehicles anyone would see had only the self-leveling feature. It was basic; there were no electronics. There was a small pump attached directly on the front of the engine and a mechanical connection to the rear sway bar. As the vehicle was loaded, the valve connected to the sway bar would increase fluid to the rear shocks, and the car would maintain normal ride height.

Some of the common failures were leaking shocks or bad accumulators. The accumulators would provide the soft ride, as the rear shocks were basically a hydraulic ram. These early systems needed little attention.

Mercedes then introduced the ABC (Active Body Control) suspension in Germany in 1999, and in the U.S. in 2000 on the S class coupes and sedans, and later on the SL. This system has a maintenance protocol that is not in the owner’s manual as required maintenance, as is brake fluid service every two years, for example.

You will need a scanner that is capable of activating all of the suspension struts through a process called “rodeo.” It looks like the car is a bucking bronco, only slower. This allows the fluid to pass through the entire system so it can be completely flushed out.

Note: You must maintain the cleanest work area imaginable when working on an ABC system, as the smallest amount of dirt will ruin the car’s system and your day. If an ABC system drops slowly after being parked, there could be a small piece of dirt in one of the control valves. A fluid flush may help dislodge it.

Any warning light complaint starts with checking codes and all TSBs. The warning lights in this system will be white or red — with red usually indicating to avoid driving the vehicle.

This 2004 S600 V12 Mercedes (see Photo 1) recently came into the shop with the rear suspension all the way down and the red warning on the dash. The pressure line to the rear had failed and the system lost all fluid and pressure. Rest assured, the pump was damaged as well.

The ABC-equipped cars have a unique reservoir. If you don’t see this notation on the dash (Photo 2), you may not have an ABC suspension, but rather an Airmatic suspension (air vs. hydraulic control). The mounting bracket (Photo 3) is designed to prevent the removal of the system filter during routine fluid checks.

The ABC system uses very high pressure, provided by a tandem power steering pump. And I do mean high pressure! Caution: System pressures run between 2,600 and 3,000 psi, so extreme care needs to be taken when working on it. Always follow the work instructions when depressurizing an ABC system before any repairs are performed. There are bleed screws to allow you to slowly release the system pressure (see Photo 4, #57, rear; image courtesy of Mercedes WIS).

When you refill the system after a repair, Mercedes recommends using a separate special funnel with a filter that is stored in a locked or secure cabinet to prevent any contaminants from entering the system. Never let the tandem pump run with insufficient suspension fluid, as you will ruin a brand new pump that way. Have a second tech nearby to be sure the fluid reservoir never gets below the minimum level mark. As soon as the pump draws air in, it’s lights out.

System leaks should be repaired right away. If fluid can get out of the system, dirt can also get in. And as I indicated before, the smallest amount of dirt can lead to expensive repairs.

There are also several accumulators on an ABC system that can cause strange noises, warning lights to come on and poor ride quality. While I covered the fluid side of the ABC system in this article, you may also see failures on the electric and sensor side of the system on occasion. Be sure to follow the required testing and the job will go smoothly.

As you become more familiar with the system, its operation, safety precautions and proper repair procedures, you will be able to work on these systems with confidence.

Air ride, active dampening and other ride control technologies probably hit their apex of development in the past 15 years. Many of these vehicles have racked up the miles since then and now need to be repaired.

Air ride and active shocks and struts will eventually fail – succumbing to either damage to or dry rot of the air spring. The dampener will lose its ability to control the suspension’s movement due to internal wear and lose fluid inside the dampener.

Many advanced suspension vehicles have 150,000 miles or more left in the engine and body by the time the ride control units have failed. The good news is there are options to restore or just repair the air ride system.

WHAT WILL THE DRIVER LOSE?

When you convert an air ride system to springs, you are not just getting rid of the load-leveling part of the suspension, you are also removing an engineered system that balances air pressure and dampener valve controls. This system is controlled by sensors that detect road conditions and body movement. But, the benefits of active suspension systems might not be a concern of a driver just looking to get to work.

WHAT IS THE PRICE?

When replacing an air ride system with springs and passive shocks and struts using a conversion kit, consider that while the estimate for this job might be in line with replacing the air units, you could be removing a part of the vehicle that the customer has grown to enjoy.

But no matter which option is being considered, the customer’s budget and needs must be taken into account at the forefront.

WHERE IS THE VALUE?

Another factor to consider is the value of the vehicle. A functioning air ride system can add thousands to the price of some vehicles. But, on other vehicles, the price may have depreciated to the point where a functioning system makes little difference.

However, the conversion could also be a selling advantage. The greatest advantage of a spring conversion is the promise that the customer will not have to endure warning lights and messages during cold mornings or when the suspension has a large correction to make.

WHAT ARE THE DRAWBACKS?

The customer probably had minimal problems with the quality of the ride with the old system, but what brought them to your shop was the malfunction light and warning. Making sure the light is gone when the conversion kit is installed should be a top priority.

When you are looking for a conversion kit, make sure to select an electronic bypass for the air ride module. These modules perform two functions. First, they disable the module and, in some cases, allow it to be removed from the vehicle. Second, they allow the CAN bus signals to be routed through the bypass and to the next module on the network.

WHAT ARE THE FIRST STEPS?

If you are thinking about recommending the latter option of converting to springs and passive shocks or struts (or maybe the owner is asking), you first need to make sure that you have done everything possible to accurately diagnose the air ride system failure.

Diagnostic labor will be a fraction of the price of the conversion kit. It could also be more profitable for your shop. With modern air ride systems, failures can occur in multiple areas, including the control modules, solenoids and even the vehicle network. A failure may appear to be due to a leaking air bag, but it might be a control module that can’t communicate, a stuck solenoid or a worn-out compressor. In some cases, the control module will require reprogramming to resolve a problem.

To diagnose an air ride problem, sell at least one hour of diagnostic labor. If the system is sophisticated like those found on late-model Land Rovers or Mercedes-Benz models with the ABC suspension, you will need to bill more diagnostic labor.

With more and more air ride-equipped vehicles accumulating miles, you can expect to see a steady stream of these vehicles in your bays. You also have more options than ever before when it comes to replacement parts and conversion kits. When writing an estimate for an air ride repair, make sure you give the customer these options.