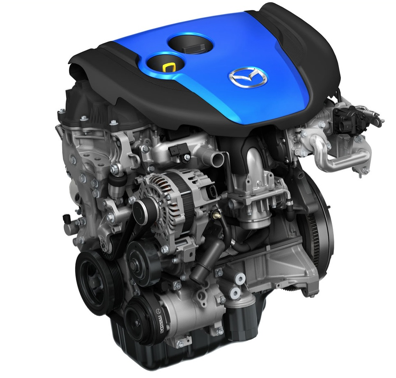 Mazda isn’t one of the high-volume automakers. With only 1.9% of the automotive market, they are smaller than Subaru, BMW and Mercedes-Benz (each of which has about a 2% market share). But lately, Mazda has been making big waves in the automotive world with its SKYACTIV technology.

But as compression goes up, so do the octane requirements of the fuel to resist detonation. If the fuel lacks enough ­octane to handle a higher compression ratio, it will detonate, knock and cause a loss of power — and possible engine ­damage, too!

So how can Mazda SKYACTIV-G engines burn regular 87 octane gasoline with a static compression ratio of 13:1? It’s Mazda magic!

Many high-performance racing engines run compression ratios of 14:1 or higher, but not on ordinary pump gas. These engines are burning super high-octane racing gas or some type of ­alcohol (methanol or E85 ethanol) and have rich air/fuel mixtures. Leaded racing fuel rated at 107 pump octane can usually handle compression ratios in the 12:1 range. With 112-octane racing gas, the compression ratio can be bumped up to 14 or 15:1. However, most racing engines are carbureted or port ­injected and do not have direct ­injection or Variable Valve Timing (VVT). Consequently, they have to burn some type of high-octane racing fuel to ­minimize the risk of detonation.

Mazda engineers knew this when they ­designed their new SKYACTIV-G engines. They knew that a higher compression ratio would ­increase fuel efficiency and economy, but that detonation would be a problem if the temperature and pressure in the combustion chamber was too high for regular gasoline or even ­premium pump gas.

Their solution was to reduce the temperature and pressure inside the combustion chamber by carefully managing the running compression of the engine via VVT, by precisely timing and ­aiming the direct fuel injection pulses into the combustion chamber, and by extracting heat as quickly as possible from the engine with a long tube 4-2-1 exhaust manifold.

A LOOK INSIDE
A SKYACTIV-G engine is pretty similar to any other engine. It has an aluminum block and cylinder head, with a pair of chain-driven overhead cams. There are four pistons, 16 valves (four per cylinder) and one platinum spark plug per cylinder with a coil-on-plug ignition ­system. Nothing unusual here. However, the pistons are domed like a performance piston to raise compression, and have a small cup in the top similar to a diesel piston. The cup acts like a mini-combustion chamber and allows the flame front to spread quickly when fuel is injected directly into this recessed cup in the top of each piston. The cup allows faster combustion and shortens the time any unburned air/fuel mixture in the rest of the cylinder is exposed to high temperatures, thus reducing the risk of detonation.

These engines also use a continuously variable, dual sequential valve timing (S-VT) system to constantly vary the amount of valve overlap as well as the ­timing of the intake and exhaust valves. This effectively reduces compression during the intake stroke, as well as pumping losses that would normally occur when the throttle is nearly closed at idle and under light load. 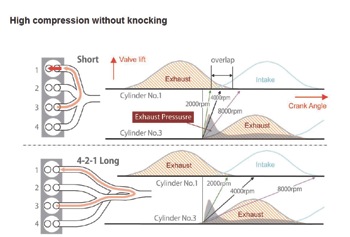 During the intake stroke, the throttle and intake valves are held open while the piston moves down the cylinder. But the intake valves don’t close when the piston reaches bottom dead center and reverses direction. Rather, the intake valves ­remain open for a brief period as the piston starts back up on its compression stroke. This forces ­excess air back out of the cylinder and allows the engine to ­behave as if it has a lower compression ratio than it actually does. It seems counterproductive, but it actually improves combustion ­efficiency while lowering the ­octane requirements to prevent detonation.

To extract as much residual heat from the combustion chamber following each power stroke, the SKYACTIV-G engines are equipped with a special long tube, four-into-two-into-one ­exhaust manifold. It looks like an aftermarket performance exhaust header and serves essentially the same purpose. The long tubes help extract the exhaust more ­efficiently so that no exhaust is sucked back into adjacent cylinders during their intake strokes. The long exhaust tubes also help increase engine torque and power.

The 2.5L SKYACTIV-G engine in the 2014 Mazda 6 is no slouch. Rated at 184 horsepower, the ­engine can push this car from zero to 60 mph in seven seconds flat. But, top speed is electronically limited to 135 mph.

As for fuel economy, SKYACTIV-G technology delivers significant gains with EPA ratings that are 15% better than Mazda’s ­previous engines of similar ­displacement. The 2.5L engine in the Mazda 6 is rated at 26 mpg city and 38 mpg highway with the six-speed automatic transmission. There is also a special Grand Touring edition available with a “tech package” that adds all kinds of electronic gadgets that include active grille shutters for improved high-speed aerodynamics. This version is EPA rated at 40 mpg highway.

DIESEL VERSION
Mazda also has a SKYACTIV-D diesel engine that will be available in the Mazda 6 and possibly other models for 2014. Unlike other diesel engines, the 2.2L SKYACTIV-D has an unusually low static compression ratio for a diesel: only 14:1.

The idea here was to reduce pumping losses by using a lower compression ratio, but still maintain high thermal efficiency by using a sequential twin turbocharger induction system setup to cram more air into the cylinders when the engine is running. There is a smaller turbo and a larger turbo that can work together or independently. The smaller turbo helps reduce turbo lag at low rpm, while the larger turbo supplies increased boost pressure for high-speed power.

The SKYACTIV-D ­engine is also more than 50 lbs. lighter than the previous diesel ­engine it replaces, and has 20% less internal ­friction.

These improvements allow the new SKYACTIV-D engine to get 20% better fuel economy. The engine also meets all U.S. and ­European exhaust emission requirements without needing an expensive and cumbersome exhaust aftertreatment system. The engine runs cleaner with virtually no soot and minimal NOx ­emissions.

MAINTENANCE REQUIREMENTS
The maintenance requirements for Mazda’s ­SKYACTIV-G engines are similar to that of other late-model imports. The scheduled oil change ­intervals for “normal” service is every 7,500 miles. Mazda recommends using 0W-20 motor oil to ­maximize fuel efficiency. Spark plugs are long-life platinum with a replacement interval of 150,000 miles. The recommended service interval for changing the coolant, however, is only 60,000 miles.

Because the SKYACTIV-G applications are still so new, you probably won’t see any engine-related ­repair work until the cars are out of warranty. Like any relatively new technology, there may be some teething problems down the road, which will ­provide service opportunities for the aftermarket. For now, the SKYACTIV technology appears to be working quite well. 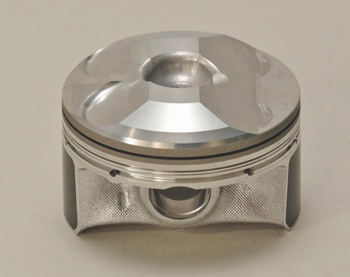 The possible cause may be debris in the oil pump pressure relief valve or the oil control valve causing a drop in oil pressure. The recommended fix is to check oil pressure, and if it’s less than specifications (7 psi or more at idle, and 43 to 62 psi at 4,500 rpm), ­replace the oil pump and clean the oil pan.

Mazda also has a TSB out warning of contaminated mass airflow sensors on some of these ­engines. Bulletin 01-009/12 says MAF sensor ­problems can be caused by debris on the sensor ­element. Check the condition and fit of the air ­filter (replace as needed), and clean or replace the MAF sensor, as needed, if the maximum static voltage reading for the MAF sensor exceeds 0.65 to 0.68 volts.