Management: The Chinese are Coming

Chinese auto makers, Chery and Geely, will likely have a presence in the U.S., but the question is when? News reports in February indicated that both companies hit snags — Chery due to a lack of money and Geely because of the inability to pass trial runs of U.S. emissions and side-crash tests. In the latter case, Geely engineers will have to redesign their cars and engines to make them viable in the U.S.

The Chery (at right) saga goes like this. Veteran auto entrepreneur Malcolm Bricklin made a deal with China’s Chery Automotive. Apparently, he had been trying to raise $200 million for the joint venture, $2 million from each dealer who signed up. While he plans to begin selling Chery vehicles in the U.S. late next year, auto industry consultants indicate that 2008 or 2009 is a more realistic target. 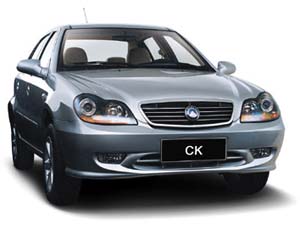 Geely (at right), whose problems could be more prohibitive, was trying to peg a $10,000 U.S. selling price, which may be a long shot if it has to redesign its engines. Buying engines from another maker would only boost costs and elevate the selling price.

Geely’s chairman, however, denies reports that it delayed plans to sell cars to the U.S. market because it failed to pass vehicle tests. He claims that Geely has conducted only rollover tests so far in the U.S. and passed them. Beyond overcoming the testing issues, Geely also intends to conduct more market research and make vehicle improvements to suit market demand. If and when Geely does arrive in the U.S., the company plans to sell 25,000 cars in the first year.

So, what does all of this mean to the market?
• Chinese auto makers will likely face a significant amount of consumer resistance, because of their newness to the market, and the fact that they’ll have to earn a level of trust common to established, proven brands.
• With that said, you might have to field questions from your current customers who may be curious about these new market entries.
• U.S. automakers will have more time before they have to deal with the effects of another wave of cheaper vehicles on market selling prices.
• Aftermarket suppliers won’t have to readily contend with the R&D that comes with providing new vehicle application coverage.
• Distributors won’t have to add new SKU coverage and shelf space for Chery or Geely aftermarket replacement parts any time soon.
• Down the road, import specialists may have to gear up to service and repair a new vehicle fleet.

There’s more to garnering mass-market appeal and acceptance than merely the vehicle frame and innards. Unless the Chinese can follow the Japanese’s highly successful model of truly understanding the U.S. market and building vehicles accordingly, their seemingly troublesome emissions and side-crash test woes will seem miniscule.