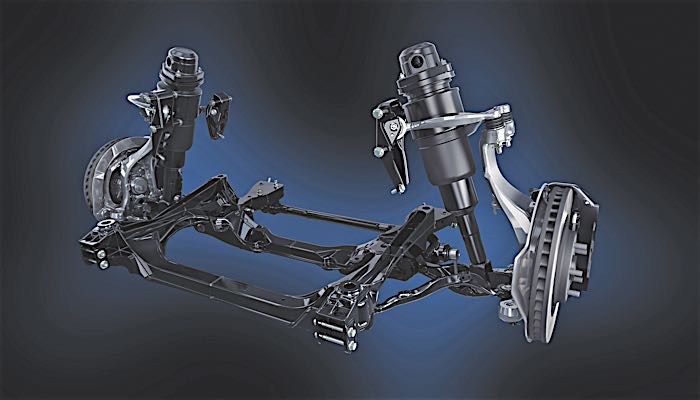 While the 2007-’12 Lexus LS460 is neither one of the best selling nor most problematic air suspensions of all time, it is probably one of the most difficult systems to diagnose. If you are not familiar with the system operation, you can throw a lot of parts at it without achieving any results.

What makes this optional system unique is the lack of a reservoir and the actuators on top of the struts used to adjust valving. The air ride system is tied into the active dampening system. The system optimizes the spring rates of the bladders and the compression/rebound settings of the dampeners. It does this very quickly and can react to bumps and body movement. The driver can select sport, comfort and normal modes. The driver can also select the high and normal modes for the air suspension. In normal mode, the ride height is optimized for the road surface and vehicle speed.

If you are jacking up the vehicle, Lexus recommends that the engine is off so the system will not attempt to trim the suspension. If the vehicle must be raised with its engine running, connect terminals 11 and 4 of the OBDII connector to stop the vehicle height control operation of the suspension control ECU. 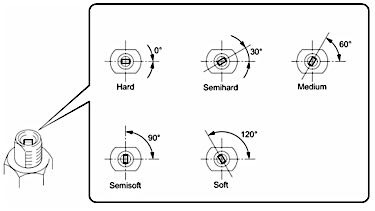 To diagnose any Lexus air ride system, it is advisable to have a scan tool that can not only communicate with the Suspension Control ECU, but also bidirectionally control the modules, actuators and valves. Not having an enhanced scan tool with these functions can severely handicap any air ride repair. It is also required to calibrate the ride height sensors. 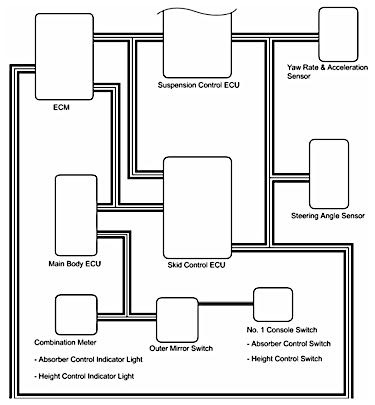 The system uses four ride height sensors. It also uses acceleration sensors to measure body movement. These sensors are mounted under the instrument cluster and in the trunk on the passenger’s side. These sensors measure how the road surface is causing the body to move. Other inputs from the ECU, Body ECU and other modules on the CAN bus are used by the Suspension Control ECU.

Through the four ride height control sensors, the Suspension Control ECU detects changes in the vehicle height that result from the number of occupants or the amount of the load. Then, the Suspension Control ECU controls the height control solenoid valves, the compressor and motor with the dryer to automatically adjust the vehicle height to a constant level. 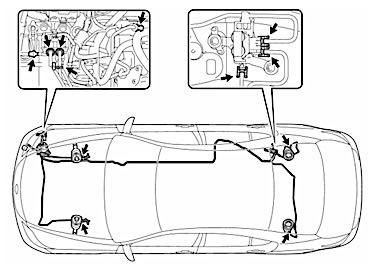 Diagnosing these sensors is straightforward and typically requires only a scope and meter. The ride height sensors have three wires for ground power and signal. These are Hall effect sensors. The accelerometers can be tested by checking the signal voltage and tilting the sensor, but the best way to test these sensors in a non-invasive manner is to observe their outputs through a scan tool.

Inspecting and Testing the Dampeners

Motors that control the valving inside the unit are located on top of the struts. These units are prone to damage if they are abused or the hood is shut with an object on top. You can remove the actuators from the strut and observe movement in the motor when the modes are changed from the driver’s seat.

It is possible to manually change the actuator setting on top of the struts by grabbing onto the bar inside the shaft. There are five settings. The setting changes for every 30 degrees of rotation. Compress the strut to see if the amount of force changes after making an adjustment.

A compressor behind the front bumper supplies the compressed air. There are two lines for the front struts on the compressor. One line goes to the rear and connects to a combination valve that contains the valves for the rear bladders. The Lexus system does not use a reservoir to trim the suspension.