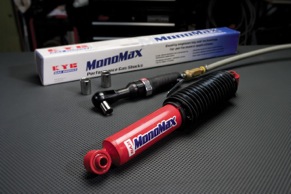 KYB Americas Corp. has expanded coverage for its truck and SUV MonoMax shock absorber lineup. New part numbers for this release cover nearly 12 million pickup trucks and SUVs on the road today, including the most popular late-model Ford, GM and Dodge applications.

KYB MonoMax are heavy-duty, large bore monotube shock absorbers built to handle the demands of working trucks, vans and SUVs. MonoMax are also popular in the off-road vehicles market, according to KYB.