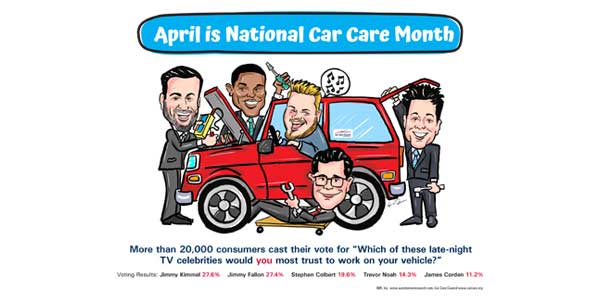 Kimmel told his audience how flattered he was to receive the recognition and discussed how he once rebuilt the master cylinder on his 1981 Mazda.

The winner has spoken. Jimmy Kimmel, the top choice of car owners asked which late-night TV celebrity host they would most trust to work on their cars, thanked America for this honor during his show’s opening monologue on April 3.

Kimmel told his audience how flattered he was to receive the recognition and discussed how he once rebuilt the master cylinder on his 1981 Mazda. He noted that if Jay Leno had been part of the survey, Leno would have received 100 percent.

The survey, conducted for the Car Care Council by IMR Inc., an automotive market research company, polled more than 22,000 vehicle owners throughout the country who were asked to choose which late-night celebrity host they would trust most to work on their car. The final results were as follows:

“We appreciate Jimmy Kimmel recognizing the Car Care Council poll results at the outset of National Car Care Month in April,” said Rich White, executive director, Car Care Council. “We wanted to have some fun with this survey and Jimmy took it to another level with his humorous monologue that shined a spotlight on auto care.”

AAPEX 2020 To Be Virtual Experience
Connect with us