Indirect Tire Pressure Monitoring Systems (TPMS) are ones that do not have air pressure sensors inside the tires. Rather, they detect a low tire by comparing relative wheel speeds via the Anti-lock Brake System (ABS) wheel speed sensors. When a tire loses air, its diameter decreases slightly.

Indirect TPMS is not as sensitive to changes in tire pressure as direct systems that actually monitor the air pressure inside the tire, but they are not as expensive either.  An indirect TPMS system is a relatively affordable add-on to a vehicle if it is already equipped with ABS.  Even so, the vast majority of vehicles that have TPMS use direct systems rather than indirect.

Federal law requires the TPMS system to alert the driver if the pressure inside a tire has dropped more than 25% below the recommended inflation pressure.  The same rules apply to direct and indirect TPMS systems. 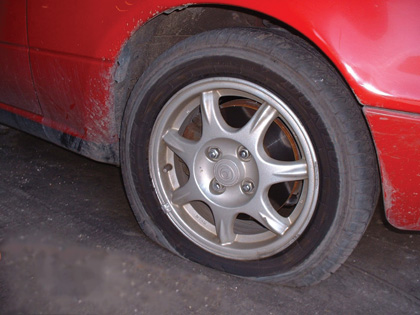 One of the weaknesses of indirect systems is that they may not turn on the warning light if all the tires are underinflated by a similar amount. If the recommended pressure is 32 PSI, but all the tires are say 24 PSI (down 25%), the system won’t know there’s a problem because all will be rotating at the same speed when the vehicle is being driven.

INDIRECT TPMS APPLICATIONS
Indirect TPMS is used on a variety of General Motors models, a couple of Fords and a smattering of Toyota and other import models.  You won’t find it on any Audi, Chrysler, Honda, Hyundai, Kia, Nissan, Mazda, Mitsubishi, Porsche, Saab or Volvo products because they all use direct TPMS with pressure sensors inside the wheels.

With so many different reset procedures, it’s important to make sure you are using the right procedure for the vehicle your are servicing.  The Tire Industry Association (www.tireindustry.org) publishes a great reference flip chart that covers TPMS reset and relearn procedures for direct and indirect TPMS on most domestic and import vehicles.  This chart is a “must have” addition to your technical library, and is must faster and easier to use than looking up TPMS reset procedures online via an aftermarket or OEM service information website.  The OEM websites all navigate differently, which means you can waste a lot of time hunting for information that is buried somewhere on their website.

TPMS reset procedures may also be found in the vehicle owner’s manual (if it hasn’t been lost).  Open the glove box and check the index in the owner’s manual for any TPMS information.

INDIRECT TPMS RESET PROCEDURES
As a rule, most indirect TPMS systems have a RESET button for recalibrating the system.  A reset is typically required after adding air to a low tire, after changing or servicing a tire, or after rotating the tires on a vehicle.

You usually turn the ignition on (engine off), and press the RESET button until the TPMS light flashes several times or goes off.  But there are a lot of variations on this basic procedure. Here are some selected examples of how to reset the system:

BUICK CENTURY
On General Motors applications, such as the Buick Century, turn the ignition ON after all of the tires have been inflated to the recommended pressure, but do not start or drive the vehicle.  With the key on, locate the TPMS reset button, then press the button until the TPMS warning light flashes three times.  Now turn the ignition off.  That resets the system and your customer is ready to go.

BUICK RENDEZVOUS
On some General Motors applications, though, there is no button marked TPMS or RESET. You may have to press other buttons on the instrument cluster or driver information center to get to the TPMS mode to reset the system.

On a Buick Rendezvous, you turn the ignition on (engine off), but hold down the MODE button on the driver information center until it displays “Low Tire Pressure Hold Set to Reset.”  Then you press and hold the SET button until you head a chime and the DIC displays “Tire Pressure Reset.”  You should then hear the chime rings three times and see “Tire Pressure Normal” on the display.

CHEVY IMPALA &
MONTE CARLO
On a Chevy Impala or Monte Carlo with indirect TPMS, a totally different reset procedure is required.  You can use the light switch or radio to reset the system.  With the light switch procedure, turn the ignition on (engine off), the turn the light switch from OFF to parking lamps three times within five seconds.  With the radio technique, turn the ignition on (engine off).  With the radio off, hold the DISP button until “SETTINGS” is displayed.  Use the SEEK button to scroll down the menu until you see “TIRE MON.”  Press the PREV or NEXT buttons until “RESET” is displayed.  Then press the DISP button again.  You should hear a chime and see “DONE” to indicate the TPMS system has been successfully reset.  Use the SEEK button to scroll through the menu until “DONE” is shown, then press DISP once more to exit from the learn mode.

FORD WINDSTAR
There are a couple of ways to reset an indirect TPMS systems on a Ford Windstar.  Some Windstars have a RESET button while others do not.  On the minivans that do have a RESET button (to the left of the steering column on the instrument panel), turn the ignition on (engine off), then press and hold the button for three seconds.  The TPMS warning light should blink three times then turn off.  If the minivan does not have a reset button, turn the ignition on (engine off), the press the Trip/Odometer button on the instrument cluster until “TIRE RESET” or “CHECK TIRE” and “RESET” are displayed.  Continue to hold the button for three seconds until the TPMS warning light flashes three times and turns off.

TOYOTA
On Toyota applications, the reset procedure is fairly straightforward, though it actually takes much longer to complete. Turn the key on (engine off), then press and hold the RESET button until the flashing TPMS warning light goes off.  Or, if it is not flashing, hold the RESET button until the light flashes three times.  Turn the key off.  But the relearn procedure is not complete until the vehicle is driven at 19 mph or faster for at least an hour. You don’t have to do this, obviously, but your customer should be made aware of the fact that the TPMS reset procedure won’t be complete until the car has been driven awhile. During this time, the TPMS system may not be able to detect a low tire, so make sure all the tires have been inflated to the correct pressure before the vehicle leaves your shop. In our October issue, we’ll cover some reset procedures for direct TPMS systems.

TPMS Education
Connect with us