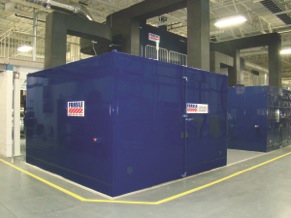 The company says this approximately $1.5 million dollar investment distinguishes Fras-le as the first friction manufacturer that owns a dynamometer with a test chamber of such a large size. The chamber can fit a full axle of a pickup truck inside for testing, whereas only corner axle testing is possible with smaller dynamometers.

Fras-le’s new dynamometer, for light- and medium-duty vehicle testing, is designed to reproduce actual vehicle road conditions and will test for durability, wear, performance and NVH. The new, large chamber also enables Fras-le to test for environmental control by reproducing many different humidity and temperature differences and to conduct enhanced noise testing. The new dynamometer is located in Link Engineering’s Dearborn, MI, facility, which is near Fras-le’s North American headquarters in Northville, MI.

"Fras-le produces original equipment and aftermarket friction materials with the quality required by the major vehicle manufacturers worldwide," said Rodrigo Meirelles, Fras-le North America’s vice president and general manager. "The new dyno, with the larger chamber, continues Fras-le’s efforts to expand and invest in our U.S. operations and gives us greatly enhanced capabilities to better serve the needs of our customers."

In addition to its lab in Prattville, Fras-le has an advanced research and development center in Brazil, where the company has multiple dynamometers and one of the best-equipped labs in the world. Fras-le houses chemical, physical and pilot labs that enable it to develop premium high-performance products. In addition, the company has state-of-the art proving grounds in southern Brazil that allows Fras-le to certify a diverse range of products and to develop and test products in accordance with the most advanced technological standards.