A fire Tuesday at E Z Transmissions in Salinas, CA, damaged one car that was in the repair shop. Total damage from the fire was estimated at $45,000. The HAZMAT team was called because of the lubricants and other chemicals that were stored at the shop.

Below is the article as it appeared on TheCalifornian.com website. 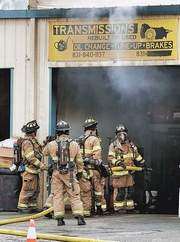 An accidental fire caused tens of thousands of dollars worth of damage to an east Salinas transmission-repair shop Tuesday morning, firefighters said.

When firefighters arrived, Loomis said, they saw heavy smoke coming out of the building and soon elevated the response to a "second alarm fire," calling more firefighters to the scene.

People in the transmission-repair shop and surrounding businesses were evacuated, Loomis said. The blaze was contained in 15 minutes.

Loomis said the fire was accidental, but the exact cause of the blaze is still under investigation.

HAZMAT team called
The City of Salinas’ HAZMAT team was called to the scene because of the contents of the shop, which included lubricants and other chemicals, Loomis said.

Firefighters were able to control runoff from the fire response, keeping water mixed with lubricants from the shop from flowing out of the immediate area, Loomis said, allowing for easier cleanup by the building’s owner.

A car that was in the shop was damaged by the heat and smoke, Loomis said.

No injuries were reported in the fire, Loomis said.